Merchant: Will Broner become the next Berto? 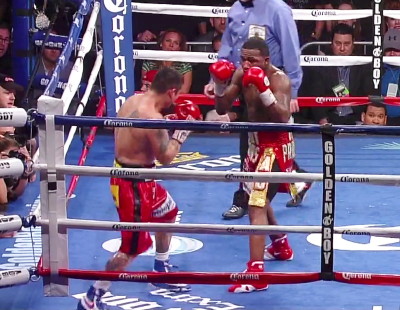 By Allan Fox: Former HBO analyst Larry Merchant saw what everyone observed last Saturday night with the highly hyped Adrien Broner (27-1, 22 K’s) getting beaten down by Marcos Maidana in losing by a painful 12 round unanimous decision. Now Merchant is wondering what Broner and Golden Boy Promotions will do to rebuild him.

Will he turn into another Andre Berto or improve and become the next Floyd Mayweather Jr? Merchant wants to see what happens next with him.

It would be a pity if Broner ends up being little more than another Berto, because Berto’s career thus far has been a bitter disappointment. Berto became popular starting around 2007 with many fans seeing his blazing hand speed and comparing him to Mayweather. But when Berto started showing signs of struggling against less than superior opposition as the WBC welterweight champion, and then was eventually beaten by Victor Ortiz, fans quickly realized that he wasn’t going to be the next Mayweather.

“It was a let down; it was a lesson,” Merchant said to Hustleboss. “If he goes away and becomes the next Berto or the next Mayweather. It depends on what he has in him…But he took a beating and showed he’s vulnerable. It’ll be curious to see how they rebuild that creation.”

For Broner to find the same kind of success that he has having before, he’ll have to at least move down to 140 and be carefully matched for a while to get his confidence back up. If Golden Boy keeps him at 147, it would probably be a big mistake with Broner taking a second and then a third loss. There are certainly guys that Broner can beat at 147, but he doesn’t appear to match-up against the fighters that can punch like Maidana and Keith Thurman.

The thing is you can’t steer Broner around those types of fighters because there are too many of them. Pretty much all of the welterweights can punch to a certain extent, so Broner wouldn’t be able to avoid running into a puncher even with the best match-making by Golden Boy. They could avoid Thurman and Maidana, but then they’d have to put him in with fighters like Kell Brook and Diego Chaves, and he’d be right back where he started from in facing someone with the kind of power that could put him on the deck multiple times.

Mayweather wants Canelo for his undercard on May 3rd »