Broner: I’m going to beat Maidana’s a** for sure! 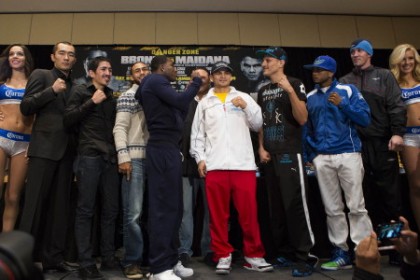 (Photo credit: Esther Lin/Showtime) By Allan Fox: WBA welterweight champion Adrien Broner (27-0, 22 KO’s) is incredibly confident of his chances to beat Marcos Maidana (34-3, 31 KO’s) this Saturday night and Broners sees this one ending early either in the 1st or the 2nd rounds. He thinks he’ll catch Maidana with a big shot and then get him out of their the way he’s done many of his previous opponents.

If Broner can accomplish that he’d be doing something that hasn’t been done before to Maidana through his 37 fights in the pro game. No one has been able to knock Maidana, but he has been down a number of times in fights against Victor Ortiz and Amir Khan.

It looks Broner’s trying to scare Maidana with his tough talk. It would work a lot better if Broner wasn’t coming into the fight off of a near loss against the light hitting Paulie Malignaggi. That fight showed signs that Broner’s power at 147 isn’t what it was at 130 and 135. He seems to have lost something in moving up to 147 to fight guys that rehydrate to over 150 lbs.

Broner is going to need to develop his power in this weight class starting on Saturday night because he’s not going to be able to run from Maidana for 12 rounds. Broner doesn’t have that kind of mobility, and his cardio isn’t to where it needs to be for him to move for 12 rounds. If Broner can’t dent Maidana’s chin with a big shot then it’s going to be a tough night for him with Maidana landing a lot of big shots. Broner does a good job of leaning backwards to avoid head shots, but he’s not going to be able to avoid Maidana hitting him with body shots. That’s something that won’t go away in this fight, and Broner will just to take the shots or lower his guard to start protecting that part of his body.

Broner says “I am the person who is going to take over boxing after Floyd Mayweather.” That means that Broner needs to be able to put in a dominating performance against Maidana because this is someone that Mayweather would easily beat.

« Greatest Knockout upset of all time?