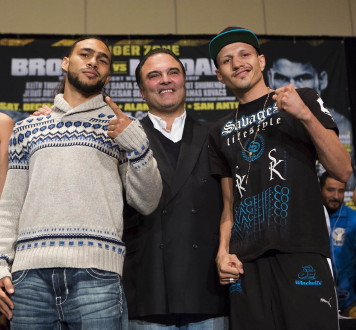 (Photo credit: Esther Lin/Showtime) By Eric Thomas: Unbeaten WBA interim welterweight champion Keith Thurman (21-0, 19 KO’s) sees his fight this Saturday night against Jesus Soto Karass (28-8-3, 18 KO’s) as a showcase fight for him to display his skills to fans across the United States in this Showtime televised fight at the Alamodome, in San Antonio, Texas, USA.

The 25-year-old Thurman’s fight won’t be the main event, as this isn’t as big as the feature bout between WBA welterweight champion Adrien Broner vs. Marcos Maidana. Thurman hopes to graduate into being a main event fighter soon. It might not happen until he picks up a big win over Broner and some of the other top fighters in the division, but Thurman is definitely on course to accomplish that if he can keep picking up big wins like his recent 10th round stoppage win over Diego Chaves in his last fight in July.

Thurman said this at today’s final press conference “I’m not afraid to put it on the line. I’ve got the ‘O’ and I’m not afraid to let it go. I don’t think this fight is going to go the distance. I’m looking forward to putting him down on the blue canvas and make sure he gets to sleep real nice. One time, every time.”

This fight might be a little more difficult for Thurman than his last two bouts against Chaves and Jan Zaveck. Those two guys didn’t have the work rate or the offensive skills that Soto Karass has. Thurman is going to need to get him out of there because if Soto Karass is able to set up shop in front of him, Thurman is going to wind up eating a lot of punches. Soto Karass isn’t a big puncher, but he keeps throwing and throwing and those shots eventually wear down his opponents.

We haven’t seen Thurman stand and trade with an opponent in close. He’s usually hitting and trying to get away to the outside. It might be interesting to see how Thurman responds at getting trapped in a fire fight up close for 12 rounds. We might see a big surprise in this fight if Thurman can don’t anything to move Soto Karass out of there.

Will Stevenson and Kovalev be HBO’s secret weapons in battle with Showtime in 2014? »