What would happen if the Tyson Fury vs. Deontay Wilder fight happens? 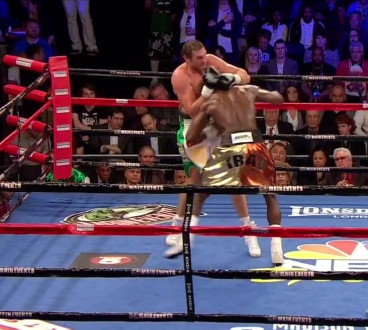 By Kyle Proctor: With the news that the British boxer Tyson Fury (21W-15KO-0D-0L) vs. the American boxer “The Bronze Bomber” Deontay Wilder (30W-30KO-0D-0L) could possibly happen next year, it would be a major risk for both fighters.

I see this fight been 60/40 in favor of Fury, because from what I have seen of Wilder, he holds the right hand back to get all of his punching power. If he lands this he could stop Fury, as he has been knocked down by a light puncher like Steve Cunningham. But Fury likes to wrestle his fighters and for a tall boxer he gets very close to them. I don’t see Wilder having the time to hold his right hand back and Fury could get a scrappy knockout like he did on Cunningham on Wilder.

Reasons why the fight may not happen are:

– Apparently Tyson Fury is retiring from boxing or so he says on twitter, but I see this as a bluff as boxing is a good way for him to make money.

– The fight would have to be hosted either in the UK or Europe, because Peter Fury, Tyson Fury’s trainer, is reportedly banned from traveling to the USA due to visa issues, and I doubt they would split up for this fight. I doubt Wilder’s promoters would agree to him fighting in Europe.

–  This would be a huge step up for Wilder considering the fighters he been matched with so far. I am not saying Fury is great but he is a big step up  compared to Audley Harrison.

– The money for this fight would not be great as it is not a PPV event and this would probably deter Wilder from taking the fight. I think Fury would take the fight as he should be beating fighter like Wilder at this stage of his career.

– It seem like another smoke screen from Wilder’s team to call out boxers when they do not have any intention of fighting them, like what they did with Dereck Chisora, and then made excuses of being unable to leave the USA to fight but then they left to spar with Haye after Chisora had moved on.

In my opinion this could be an entertaining fight, but also this would be a risky fight for theses two boxers as the loser would have to do some career rebuilding like David Price. While the winner wouldn’t be proving a lot as they still would have a lot more to prove and would only gain a slight boost in the rankings if any.

I would like to hear you opinion on this possible fight and what you think would happen in the comments? I see this fight ending in a stoppage but I am not sure by who.

« Rios: This is my coming out party against Pacquiao

DeGale: If Froch hits Groves on the chin, he’s a goner »