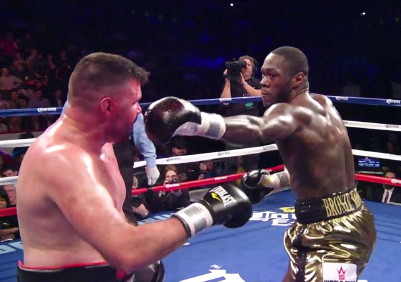 By Scott Gilfoid: Heavyweight Deontay Wilder’s promoter Richard Schaefer says that Tyson Fury’s promoter Mick Hennessy has gone quiet about a fight between Fury and Deontay after initially showing interest in the match-up two days ago, according to RingTV. Schaefer says he hasn’t heard from Hennessy since and that he’s not returning his phone calls. Schaefer believes that Hennessy spoke to his matchmaker and he may have concluded that Deontay is way too dangerous for Fury to fight.

Schaefer said to RingTV “I tried to reach him [Hennessy] yesterday and he didn’t answer his phone or call me back. So what I think has happened is that he must have talked to his matchmaker and they must have realized that Tyson Fury has no chance, and I think they must have changed their minds all of a sudden…it has become very, very quiet.”

I am so not surprised with all of this. Oh, it’s so, so sad. Fury was yacking 24/7 about wanting to fight Deontay and name dropping something fierce, but when the move is made by Deontay’s promoter to set up the fight, Fury’s promoter goes completely quiet. This is hilarious but utterly predictable. Mentioning Wilder’s name is a great way for fighters like Fury to get some badly needed attention, so I can certainly understand why they might have done that.

I figured that Hennessy will look to take Fury’s career in reverse mode and take on the much safer fight against the 6’1′ Dereck Chisora, because that’s a bout that Fury can get and it’ll probably do well in the UK. I’m not sure how many times Fury can milk that same fight before the British public grows sick of seeing them face each other, but I can definitely see that bout bringing in a lot of fans. Between the 6’7″ Deontay and the 6’1″ Chisora, the easy choice is Chisora because Fury already badly schooled him already and he can clearly do it a again for a nice payday.

You’ve got to feel sorry for Deontay because he wasted his time and got his hopes up for the Fury clash. I imagine it’s going to be a read buzz-kill when he discovers he’s not going to get that fight. But Schaefer says he’s interested in matching Deontay against Bermane Stiverne for the vacant WBC heavyweight title if and when the World Boxing Council strips Vitali and gives him the Emeritus title for failing to defend his WBC strap for ages. The winner of the Deontay-Stiverne fight could then face mandatory challenger Chris Arreola in their first defense of the belt, and then Wladimir Klitschko in a unification match.

Deontay doesn’t need the Fury fight to make big things happen in 2014, because he’s got the talent and the right promotional company behind him to open up a lot of doors to get to the top. 2014 is going to be a big year for Deontay and he’s got a lot to prove.

Stiverne packs a punch and he’ll it interesting for as long as the fight lasts against Deontay.

« Is Anthony Joshua going to go far in professional boxing?