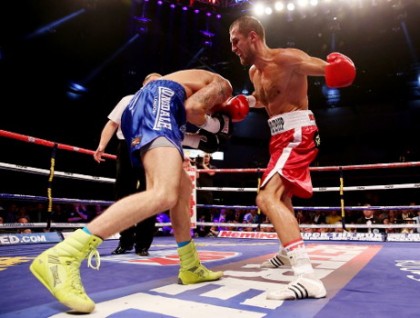 Kovalev ended up destroying Cleverly in 4 rounds in a fight that was one-sided from start to finish. HBO no doubt would like to televise a fight between Kovalev and Hopkins or Kovalev vs. WBC light heavyweight champion Adonis Stevenson in the near future. Jones Jr. thinks that Kovalev shouldn’t take a fight against Hopkins due to the soon to be 49-year-old fighter having too much skills, and experience for the Russian fighter.

Jones Jr. said on HBO “Yes, I think he [Hopkins] could [beat Kovalev], mainly because Kovalev is a big puncher who comes straight ahead, and who looks to destroy you with every punch. That plays directly into Bernard’s hands. So I think he could definitely hold his own with a guy like Kovalev. Going up against Hopkins is not smart for Kovalev. He’s not good at going over 8 rounds, so why would you go into the ring with a 50-year-old assassin who is very experienced in going those rounds when you can take a younger guy who doesn’t have a very big punch.”

There’s no doubt that Hopkins would be a tough fight for Kovalev, but it’s a fight that Kovalev would say yes to due to the money involved. There’s a lot of risk for Kovalev, but he’s not made the huge money that Hopkins and Roy Jones Jr. has, so he’s not going to shy away from a fight with Hopkins for fear of losing. If that fight can be made, Kovalev will take that in a heartbeat. Jones Jr. sees things from his perspective being a guy that has already made a lot of money in the sport, but Kovalev has gotten to that point. He still has a hunger and ambition. He’s not going to run away from Hopkins.

Hopkins has a fight against Karo Murat (25-1-1, 15 KO’s) on October 26th Boardwalk Hall, in Atlantic City, New Jersey, USA. If Hopkins wins that fight, there’s going to be a lot of pressure on him to face Kovalev, and he’s going to have to make a big decision about whether he feels like taking that fight.

Kovalev won’t avoid facing Hopkins, because he needs to beat Hopkins to become a big star in the division. There are only a couple of names at 175 that Kovalev can fight in order to become a star, and one of those names if Hopkins with the other being Adonis Stevenson. Kovalev isn’t going to avoid one of the two big names he needs to fight just because Roy Jones Jr. doesn’t think he should take that fight.

« Barker to face Felix Sturm next, then possibly Geale again

Kovalev: I’ve had harder fights in my career than Cleverly »