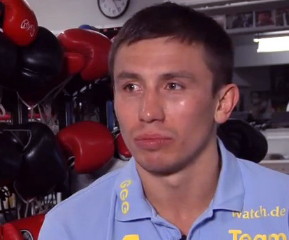 By Dan Ambrose: A fight between WBA middleweight champion Gennady Golovkin (27-0, 24 KO’s) and #5 WBC, #6 IBF Curtis Stevens (25-3, 18 KO’s) has been agreed upon for November 2nd at Madison Square Garden Theater, in New York, New York, USA, according to Chris Mannix of Sports Illustrated.

Golovkin’s promoters at K2 Promotions recently made a reported offer of $300,000, but that offer was turned down by Stevens’ promoter at Main Events. It looks like K2 might have sweetened the offer to get the 5’7″ Stevens’ promoter to agree to the fight. The fight will be televised by HBO. This is a fight that they probably like because HBO seems to be focusing more on putting together fights that promise to be slugfests nowadays, and this one will definitely be a war for as long as it lasts.

Stevens has good power, and he’s turned his career around recently in moving down from the super middleweight division. He’s a lot better fighting at middleweight than he ever was at 168. Stevens has stopped three out of his last four fights since his loss to
Jesse Brinkley in 2010.

Stevens has fought only 4 times in the last 3 years, and this could be a problem for him against a puncher like Golovkin, because he’s a lot better than the guys that Stevens has been fighting during his career, especially lately. Main Events hasn’t done much as far as matching Stevens against good opposition since his loss to Andre Dirrell year ago.

Golovkin will probably have too much size, power and skills for Stevens to cope with him. Stevens looks good against guys like Saul Roman and Elvin Ayala, but there’s a big difference between those fighters and Golovkin. Stevens is probably going to find out the hard way that he hasn’t improved enough to take on the best at 160. He might be able to give Golovkin problems for a round or two, but once Golovkin has warmed up, he’s going to take Stevens to class and likely school him.

This is premature title shot for Stevens, because his last three fights against Derrick Findley, Saul Roman and Elvin Ayala aren’t the type of opponents you like to see contenders facing before fighting for a world title against the likes of Golovkin.

Barker to face Felix Sturm next, then possibly Geale again »