Reynoso: Mayweather made a mistake of choosing to fight Canelo at junior middleweight 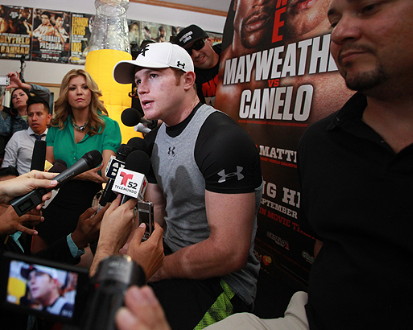 (Hogan Photos) By Dan Ambrose: Chepo Reynoso, the trainer for WBA/WBC junior middleweight champion Saul “Canelo” Alvarez (42-0-1, 30 KO’s), thinks Floyd Mayweather Jr. (44-0, 26 KO’s) made a crucial error in his negotiations with the 23-year-old Canelo by choosing not to try and make the fight at 147 lbs. instead of 152 lbs.

Mayweather Jr. agreed to Canelo at the catch-weight at 152 lbs., which Mayweather’s adviser Leonard Ellerbe thinks was a mistake on Canelo’s management’s part for agreeing to the small catch-weight instead of having the fight take place at 154.

Reynoso said to RingTV “If they think that we are inept and stupid [for agreeing to the catch-weight], then they also made a mistake. Mayweather made a mistake by choosing to fight in the light middleweight class instead of fighting as a welterweight.”

I agree with Reynoso. Mayweather Jr. was the name, not Canelo, and he should have given the red-haired Mexican fighter an ultimatum of facing him at 147 lbs. or not at all. If Canelo said no, then he would have been forced to fight guys that the boxing public don’t care about.

Mayweather Jr. also should have given a firm ultimatum about a rehydration limit of 8 pounds only, so that Canelo would be forced to rehydrate to no higher than 155 lbs. instead of 172 lbs. or higher. It makes a big difference if Mayweather Jr. is fighting a 155 lb. fighter and a fighter that’s in the light heavyweight class at 172 lbs.

Mayweather Jr. was too nice with the negotiations with Canelo, and that was a big mistake. A rehydration limit with a penalty of $5 million per pound would have kept Canelo right at 155, and my guess he’d be a lot easier to handle than he will be if he comes into the ring on September 14th weighing well over 170 lbs. A catch-weight of 152 lbs. is nothing. Mayweather Jr. and Ellerbe didn’t get over with this catch-weight.

They gave Canelo a huge advantage by only asking for 2 pounds instead of having come all the way to 147 like he should have. After all, Canelo was the one that was hounding Mayweather Jr. for the fight, and not the other way around. If Canelo wanted the fight bad enough, he would have agreed to come down to 147, and he would have had to agree to a rehydration limit.

I hope in the negotiations that Mayweather Jr. has with his next opponent, he plays hardball with them. It really doesn’t matter when he’s facing actual welterweights, but when you’re facing a guy like Canelo, who is really more of a middleweight than he is a junior middleweight, then you got to make the guy lose weight to make it a more fair fight.

« Mayweather vs. Canelo ALL ACCESS episode 2 this Saturday, August 31, on SHOWTIME