Mayweather vs. Canelo ALL ACCESS episode 2 this Saturday, August 31, on SHOWTIME 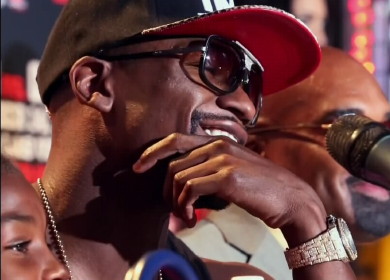 By Dan Ambrose: Floyd Mayweather vs. Saul “Canelo” Alvarez ALL ACCESS episode 2 will air this Saturday, August 31st on SHOWTIME at 10 pm ET/PT. The viewing numbers for the episode need to dramatically improve over the low numbers the first episode brought in. Only 225,000 viewers watched the episode, and that sends a signal that the Mayweather-Canelo fight might not be as big as Golden Boy Promotions had hoped it would be.

It doesn’t really matter if it doesn’t break records, because it’s still going to do well, and it’ll clearly draw in more than 1 million PPV buys. It could go as high as 1.4 million, and that would be a respectable number. The main thing that Golden Boy should be focusing on is that this fight will help making Canelo a bigger attraction so that he can start having his own PPV fights where he’s the headliner.

Canelo took a big step backwards with his last fight against Austin Trout last April where two of the judges had wild scores that didn’t make any sense at all with what happened in the ring that night. They had Canelo winning by a near lopsided score, when many boxing fans saw it as a draw, and a lot saw Trout having won it.

If that happens again with Canelo getting a wide score in a fight that he appeared to lose or fight to a draw, it’s just going to turn fans off from Canelo completely. If he wins the fight, he has to look like he’s won it this time.

It’s going to be tough for Canelo, because he doesn’t have the one-punch power, or the stamina needed to push himself to fight hard for 3 minutes of every round. Canelo doesn’t have that extra gear that good fighters have to pour it on to get a knockout or to win a fight in a convincing manner. He always looks like he’s trying to pace himself in order not to run out of gas.

Reynoso: Mayweather made a mistake of choosing to fight Canelo at junior middleweight »