Khan: I used to make a lot of mistakes 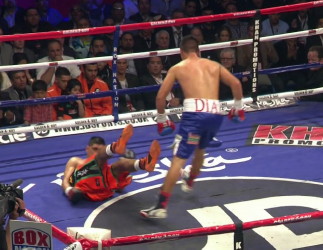 By Scott Gilfoid: Amir Khan (28-3, 19 KO’s) thinks that with the help of his new trainer Virgil Hunter, mistakes are a thing of the past. Khan and Hunter have been working together since Khan’s fight against the much smaller lightweight Carlos Molina last December, and Khan feels like Hunter has changed him for the better.

I personally can’t see any change in Khan’s game whatsoever other than him looking even worse than he was before Hunter started training him. But if Khan really believes he’s getting better with Hunter guiding him then so be it. I just wonder if Khan will keep saying that after he gets beaten again.

Khan says he used to make mistakes? What the heck is he talking about? He was almost beat in his last fight against 2nd tier welterweight Julio Diaz last April in a fight where Khan was knocked down in the 4th round, and staggered over and over again by Diaz. Khan won the fight by the scores of 114-113, 115-113 and 115-112. I had Diaz winning easily. The fight took place in the UK, by the way.

I could understand Khan yapping about how he’s no longer making mistakes if he’d actually been looking good in his recent fights, but he looked horrible against Diaz AND Molina. I didn’t see a mistake free fight from Khan against Molina, and definitely not against Diaz. Where does Khan come with this stuff?

It’s almost as if Khan is talking about fights that he doesn’t have a clear memory of, because he was making god awful mistakes left and right in both of those fights.

To be sure, Khan is fighting more cautiously under Hunter’s watch, but he’s still coming forward looking to throw combinations, and he’s still a sucker for a left hook. All Diaz did was wait on Khan for him to come forward, and then he was nailing him with big left hooks each time. In other words, he was timing Khan’s attacks.

Diaz knew Khan would come forward sooner or later, and as soon as he did, Diaz would nail him. I didn’t see any real benefit to Khan’s new cautious style of fighting at all, because he’s still predictable in what he does once he comes forward.

Khan is hoping to fight IBF welterweight champion Devon Alexander on December 7th in Dubai, but Alexander not surprisingly isn’t interested in traveling to Dubai to fight in front of a bunch of Khan’s fans. As such, the Khan-Alexander fight isn’t looking promising for December.

« Canelo sparring with Mosley Jr. to get ready for Mayweather

Mayweather Sr. wants Floyd Jr. to beat Khan, but thinks Devon Alexander will do it first »