Mayweather vs. Canelo – The 0 must go 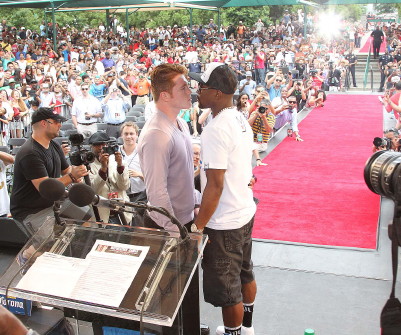 (Photo credit: Esther Lin/Showtime) By HOOKmedia: Floyd Mayweather Jr. (44-0-0, 26 KO’s) vs. Saul “Canelo” Alvarez (42-0-1, 30 KO’s) promises to be an event worthy of global attention. But who will come out victorious with their precious O still in the bag? This article will look at both fighters opportunities for glory in their upcoming battle on September 14th 2013.

Starting with the flamboyant Mayweather, he has inherited and constructed a fighting style that truly magnifies the beauty of the sport of boxing. He illustrates the art of punishing without being punished and we must all take a moment to truly acknowledge this man’s God given talent and his unparalleled desire to be the best.

On September 14th, we will see a Mayweather more than likely at his sharpest, executing his straights and hooks with precision second to none. Mayweather has mastered adaptation in the heat of the moment and i can see Canelo offering matters for concern but being punished for his lack of mobility. Styles make fights and Mayweather’s style against a young, hungry and determined Canelo promises a war, the question remains as to whether that war will be in the minds of the fighters or physical, for the world to see.

Saul “Canelo” Alvarez, 22 years old, desperate for world recognition and backed heavily by Oscar De La Hoya (who seems bitter until this day at his loss to Mayweather). Golden Boy Promotions have made it clear that this is their last card and with that in mind, they have opted to put all their eggs into Canelo’s basket. The problem with this is that Canelo truly is not ready for a fight of this magnitude and will more than likely be dismantled on September 14th but, and there is always a but, a puncher always has a chance and we could potentially see one or two of Canelo’s perfectly thrown body punches dig deep enough into Mayweather’s ribs to slow him down just a little, allowing for Canelo to maximize his opportunity when the smallest of windows open for him. But, the chances of that happening are slim and hardly believable given that 17 years of victories against fighters with different qualities, all of whom fell short when faced against Floyd “Money” Mayweather.

It’s defense VS attack, experience VS desperation & skill VS power. Defense, experience & skill demonstrate patience, calculated execution and confidence, whereas attack, desperation & power showcase hunger, restlessness & quantity over quality. Clean shots score points, wild shots make crowds cheer. Points mean something, crowds cheering pay wanting to see excitement, let the mind ponder on what matters to a man who puts his body through hell in months of preparation and comes out willing to put it all on the line. Which of these two fighters specializes in getting a win by fighting the best time & time again? I know what my answer is!

Ultimately, this is a fight that must deliver a victory and therefore the O must go. I have not opted against F”M”M previously and I choose to remain faithful, so i predict another victory for Money May. The question is what do the people have to say and who do you think will win? September 14th is just over 2 months away, who’s O is getting tired holding up a win record of 40+ for either fighter, which O’s legs will give in first…the night of September 14th will decide.