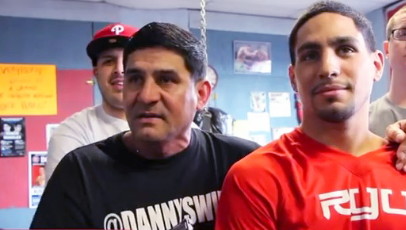 By Meyer Lynk: Angel Garcia, aka “Mr. I would never lie to you,” aka, The Truth, aka Danny Garcia’s (26-0) father and trainer is well known for being out spoken and never holding back on saying whatever is on his mind. No matter who it offends, fighters, trainers, or fans, if Angel feels like its the truth, then hes going to say it.

We have seen him verbally assault, Kendall Holt, Amir Khan, and his most recent verbal assault that lead to a brawl, Zab Judah – just to name a few. This time he has a few things to say about the 2012 trainer of a year and former IBF champion from Oxnard, California, Robert Garcia.

In Angel’s interview with Thaboxingvoice.com he bashes Robert Garcia’s training method for Nonito Donaire’s fight against Guillermo Rigondeaux. If you saw the fight on HBO you heard the commentators state that Roberts only interaction with Nonito for that fight was only through the phone and the commentators went on to say that maybe that is the cause for why Nonito lost the match. Here is what Angel Garcia had to say about that (By the way, its a hilarious video thats guaranteed make you chuckle) – http://www.youtube.com/watch?v=mAMYwRuLAd0

Angel made some pretty foul comments in the past that I thought was unnecessary but I’m going to have to agree with him on this one. The way I see it is this, how can you be 2012 trainer of the year and one of your top fighters Nonito Donaire has the biggest fight of his life against a fighter that’s more skilled than anyone he has ever faced and you, as a trainer, will train him over the phone?

Do you agree with Angel Garcia’s comment? Or do you think hes just talking greasy as usual?