Wilder-Chisora fight still up in the air 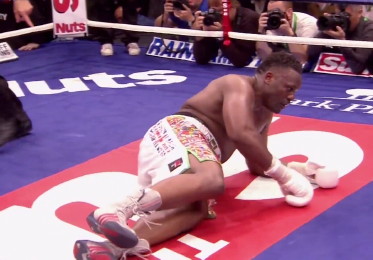 By Scott Gilfoid: The proposed June 15th clash between the up and coming star heavyweight monster puncher Deontay Wilder (28-0, 28 KO’s) and the domestic British heavyweight Dereck Chisora (16-4, 10 KO’s) is still up in the air, as the negotiations are still ongoing and it’s unclear if the fight will take place or not.

There’s a lot of stuff happening that could potentially cause the fight from getting made, such as Deontay’s recent arrest in Las Vegas, Nevada.
Chisora’s matchmaker Dean Powell is hoping the fight can be made, but there are a lot of hoops that need to be jumped through before the fight can get put together and at the end of the day it might not be worth it to make the fight. It might be best that it scraped.

I think it might be best for Golden Boy to forget the fight and focus on fighting in the United States right now, at least for the time being. IF Chisora wants to come to the United States and fight Deontay on one of Golden Boy’s cards then it’s all good but if they have their minds made up that the fight has to take place in the UK, then I’d recommend that Golden Boy say no to the deal because Deontay is the name here, not Chisora.

Deontay is the future star and he doesn’t need to be flying back and forth from the U.S to the UK over and over again instead of the UK fighters coming to the U.S to fight him. Chisora is the opponent in this fight, not Deontay.

These two fighters are going in separate directions with Deontay heading in the direction of a world title and Chisora seemingly in a downward spiral with his career after losses to Tyson Fury, Robert Helenius, Vitali Klitschko and David Haye.

I think Golden Boy needs to match Deontay with some of the local talent like Bryant Jennings and Johnathan Banks rather than a guy that has lost a bunch of fights in the past two years like Chisora. Deontay is supposed to be moving away from fighting journeyman level fighters, not making a career out of it. Heck, I’d rather see Deontay face one of the easy mark heavyweight contenders like Manuel Charr than Chisora because at least with Charr he’s got an actual top 15 ranking and can help Deontay’s career. With Chisora, it’s a no-win situation for Deontay. If he knocked Chisora out cold, big deal. Haye already did it. Deontay’s getting sloppy seconds and no credit if he smashes Chisora just like Deontay got no credit for his recent annihilation of Audley Harrison last month.