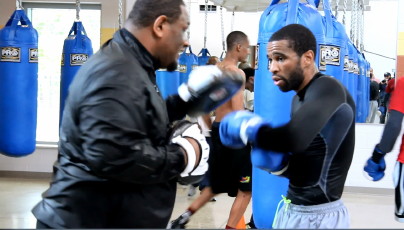 Peterson is coming off an impressive eighth round TKO victory over Kendall Holt (28-6, 16 KOs) after more than a year of inactivity amid a PED controversy and failed rematch attempt with Amir Khan (28-3, 19 KOs). And while many boxing pundits view this fight as a risky match-up for the DC-based fighter, he appeared unfazed by the hype surrounding the Argentinean KO artist.

Peterson displayed the confidence and focus of a well-prepared fighter, despite facing an opponent with a penchant for knockouts. In addition, the IBF Champ was in excellent physical shape, breezing through a training session that included mitts and cardio work.

When asked about what he expects from Matthysse, Peterson said, “I’ve known him for a while. [Matthysse is] a strong guy who’s going to bring it all night, pretty much the way I like it to be.”

“The main question people keep asking me to talk about is punching power. But, this is what I signed up for. I realize that I’m going to get hit in the face and I’ll be hittin’ him back in the face. So I’m not worried about taking a punch or afraid of a knockout. I’m planning on going the twelve rounds and what happens in between that, that’s what happens. But [being stopped], that’s not nothin’ that I’m thinking about.”

• Friends since their amateur days, Peterson and Broner reportedly sparred several times during this training camp in preparation for their upcoming bouts.

• Lamont Peterson’s brother, Anthony Peterson (31-1, 20 KOs), a lightweight contender who will fight on the May 18th card, also worked out for the media, fielded questions, and posed for pictures.

Media Workout Recap: Mitchell, Banks, Broner, More! Paul Jones
The Year in Review: Seven Fights That Moved the Boxing Needle in 2011—Pacquiao, Ward, More! Paul Jones
The Capital Showdown: A brief review – Peterson beats Khan, More! Paul Jones
—Questions/Comments: Contact Justin at justinjones2112@gmail.com.
Note. The views expressed herein are those of the authors and do not reflect those of Boxingnews24.com or its affiliates.