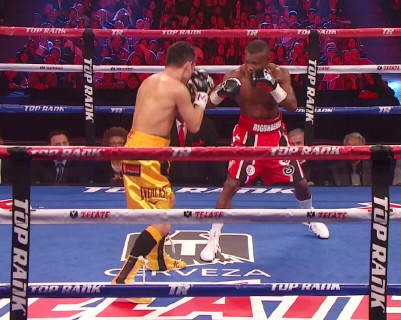 Garcia, who is good friends with Donaire, was at the fight last night at the Radio City Music Hall in New York, New York to watch the fight.

Mikey said to Hustleboss.com “Rigondeaux can stay at 122 if he wants to, but there probably aren’t many fights there for him. So he might also decide to move up. If he wants to move to 126, I’m good to go for a fight with Rigondeaux.”

Mikey might end regretting it if their mutual promoter Bob Arum of Top Rank were to make this fight because with the way that Mikey starting to get tired and hit by Orlando Salido in his last fight, I think Mikey would end up getting his head boxed off by the much, much faster Rigondeaux.

It’s a potential disaster for Mikey and hopefully his brother Robert Garcia talks some sense into him because he doesn’t have the game to beat Rigondeaux. Mikey Garcia is the same kind of pot shot fighter than Donaire is, but he doesn’t have Donaire’s hand speed.

Mikey is slower and about the same height and weight as Donaire. If you had inserted Mikey in the ring last Saturday night in place of Donaire, it would be the same result with Mikey getting countered each time he tried to throw something.

One thing I noticed in his fight against Salido is that Mikey doesn’t like to get hit, and he doesn’t look good when he’s getting the same medicine that he’s giving to his opponents.

Also, Mikey’s stamina isn’t that great either. He looked like he was fading starting in the 7th round against Salido and not landing nearly as many punches. In the 8th, Mikey looked happy to have the fight stopped because things were starting to turn in Salido’s favor.

Rigondeaux dominates Mikey in an even more one-sided fight than last night. I just don’t think Bob Arum will allow a second one of his highly hyped fighters to taste defeat against Rigondeaux because Mikey Garcia has the potential to be a good little money maker for Top Rank, and he’s not going to want to lose that potential revenue stream by putting him in with Rigondeaux and having him spoil it by exposing him like he did Donaire.

« De La Hoya: Donaire should have taken the $3 million offer to fight Mares

Deontay Wilder: I end careers; Audley could be my next victim »