Deontay Wilder: I end careers; Audley could be my next victim 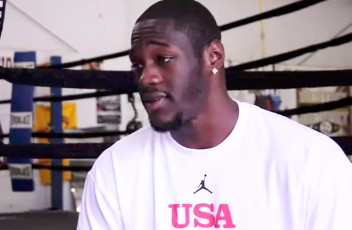 By Scott Gilfoid: Unbeaten heavyweight Deontay Wilder (27-0, 27 KO’s) says he’s ended a number of fighters’ careers by knocking them out in a brutal fashion, and he sees himself as having the potential to do the same thing for British heavyweight Audley Harrison (31-6, 23 KO’s) in their fight on April 27th at the Motorpoint Arena, in Sheffield, United Kingdom.

Deontay said to thesun.co.uk “Many times I’ve hit guys and ended their careers. This is the power I bring and now he’s [Audley] facing a young lion – a strong, dangerous guy. If he gets hit right that will retire him…I end careers.”

I think Wilder will have to really nail Audley on the sweet spot if he wants to end his career with a particularly vicious knockout because just flat out knocking Audley out probably won’t do the job. Deontay is going to need to knock Audley clean out with one of those right hand shots that has Audley out cold on his feet so that when he falls down, it’ll be like a tree falling down.

Audley might retire from a knockout like that but he won’t if Deontay knocks him out the same way that David Price and David Haye did recently.

I don’t know or care whether Audley retires after he gets knocked out, but I do know his chances of making it past the fourth round against the talented 6’7” Deontay are almost nonexistent. The only way Audley makes it past the 4th round is if he knocks Deontay out and that’s not going to happen.

For Audley to make it past the fourth, he’s going to have to take some vicious right hands that would knock anyone out in the entire division, and Audley isn’t going to be able to take those shots, not from someone like Wilder. He hits too hard.

Heck, I can see Audley flopping in the 1st round after getting hit from the air from one of Deontay’s right hands that go sailing by. That air from one of those shots is enough to put Audley on the canvas and give him second thoughts about getting back up to continue fighting.