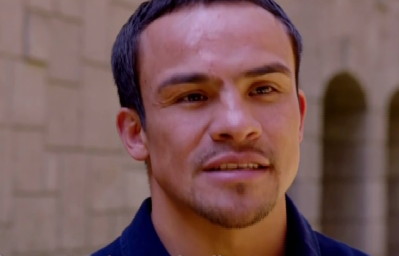 By Chris Williams: Juan Manuel Marquez will be at the fight tonight to watch WBO welterweight champion Tim Bradley defend his title for the first time against Ruslan Provodnikov in Carson, California.

Marquez is scouting out the 29-year-old Bradley for a possible fight against him later on this year in September possibly unless Marquez is persuaded by Top Rank promoter Bob Arum to face Manny Pacquiao. Bradley thus far has seemed lukewarm to the idea of facing Marquez, who he considers a very good fighter.

You can understand why Bradley might not be too excited about a fight with Marquez, because this guy could potentially beat him and that would possibly get in the way of Bradley getting a second shot against Pacquiao, and that’s the fight he really wants due to the money and attention he would get.

Bradley wasted months waiting for Pacquiao to try and get a rematch against him, and even missed out on a big payday fight against Lamont Peterson waiting for the fight.

Marquez said to the Latin America Herald “Bradley won a controversial decision over Pacquiao, so why not take him into consideration if he’s a good fighter.”

Marquez is also considering a fight against the winner of the Brandon Rios vs. Mike Alvarado fight that takes place at the end of the month on March 30th. That’s probably not nearly as interesting a fight for Marquez because neither of those guys have title belts in their possession and don’t have much of a fan base to speak of.

I’m sure Bob Arum would love the idea of Marquez fighting the winner of that fight because it could help increase the popularity of one of those fighters, but it’s still not a good a fight for Marquez because the money won’t be all that great and the fight won’t get much attention from boxing fans.

« Guerrero: I’m going to take the fight to Mayweather

Warren wants to match Chisora vs. David Price in the summer »