Warren wants to match Chisora vs. David Price in the summer 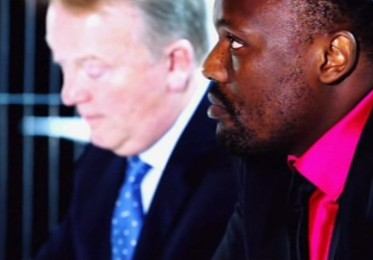 By Scott Gilfoid: Promoter Frank Warren is hoping he can set up a fight between former British/Commonwealth heavyweight champion Dereck Chisora (15-0, 9 KO’s) and David Price (15-1, 13 KO’s) this summer.

Chisora, 29, will have to win his fight next month against a still to be determined opponent on April 20th on the undercard of Nathan Cleverly vs. Robin Krasniqi at the Wembley Arena in London.

Warren said to espn.co.uk “Looking to maneuver ‘Del Boy’ straight back into championship contention – ideally in a crack at [David] Price for his old belts at a big arena this summer.”

Price was interested in a fight with Chisora before Price was knocked out last month in the 2nd round by 41-year-old Tony Thompson, but I wonder if Price is still feeling the same way now. I mean, Chisora is a pretty basic fighter who is no longer finding success in his career, but he can still punch when he loads up against guys that are standing right in front of him the way that Price would.

Price’s promoter Frank Maloney has matched him softly for most of his career until the loss to Thompson, and even that fight was considered a mismatch going in due to how poorly Thompson had looked in his previous fight against IBF/IBO/WBA/WBO heavyweight champion Wladimir Klitschko last year.

I would be very surprised if Maloney was willing to let the 6’8” Price in the ring with Chisora, even though the fight does make sense. If Price can’t even beat a fighter like Chisora without getting knocked out then that tells you that Price isn’t going to find success in his career, and he can then retire early with his mental faculties still intact.

Putting Chisora in with a puncher like Price also has risks for Chisora. Dereck has already lost four out of his last five fights, and even if he beats the soft touch they put in the ring with him on April 20th, it’ll still mean that Chisora could end up with five losses in his last seven fights if he gets destroyed by Price. What is Chisora doing to do with his career if he gets another loss? He might as well retire and get a 9 to 5 job at that point.

Judah-Garcia: Zab gets another crack at a title »