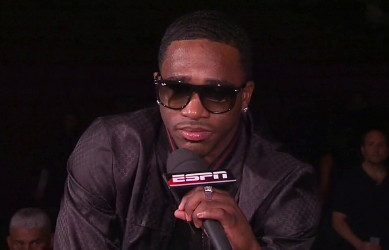 Broner sent this message to Burns on his twitter today: “What up Ricky Burns now that your fight is canceled come fight me B****!!!!

Sadly, this is all Burns could say in response: “Adrien Broner, haha you’ve cheered me up a bit the day with that!”

Burn’s promoter Frank Warren has already rescheduled the Burns-Vazquez fight for a month later on April 20th at the Wembley Arena in London, United Kingdom, but it sure doesn’t sound like Burns’ manager Alex Morrison is eager to take a risk agree to that fight after having three straight fights fall through for Burns.

Morrison told STV “This is unacceptable…Ricky is upset about it…I’m not saying if it is or isn’t going to go ahead on that day [April 20th]. Let’s just say our relationship with Frank Warren is pretty strained.”

Why doesn’t Burns stand up and say no to the Vazquez fight and take the bout offered to him by Golden Boy Promotions and Broner to fight on June 15th in Las Vegas, Nevada? Believe me, this is a fight that wouldn’t fall through on Broner’s side. He will be there, and he won’t drop out for this or that.

Of course, if Burns and his manager don’t want that fight then I can understand that. I mean, there is tons of little known contenders standing in line to face Burns, and I imagine he could hold onto his title for a long time if he takes those safe fights.

At this point Burns and his manager need to think about walking away from the Vazquez fight because it’s more risk than it’s worth it. The chances of Burns losing the fight are fairly high, and once that happens then he can forget all about the big bank he’d get for the Broner unification bout. I can understand how they might want to fight Vazquez because of the potential to capture his IBF title, which in turn would put Burns in a bargaining position to get more green stuff from a fight against Broner.

However, the risk is too high for Burns because he could either lose the fight or win a controversial decision that will turn Broner and Golden Boy away from wanting to fight him. I’d say the chances are high that Burns ends up looking terrible against Vazquez on April 20th if they take that fight, and then Broner won’t want to waste his time with fighting him.

Burns and his manager need to take the safe money against Broner right now while they still can, and if they want to fight Vazquez later for his IBF strap while they’re still licking their wounds from the loss to Broner, then that’s fine. But you don’t put off a huge fight against Broner for a dangerous one that pays less against Vazquez. That doesn’t make good business sense.

Miguel Cotto to fight in November »