Bradley under consideration for Pacquiao’s next fight in Macau 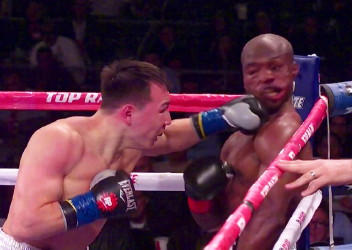 By Chris Williams: WBO welterweight champion Tim Bradley (30-0, 12 KO’s) put in a good enough performance for him to now be under serious consideration for 34-year-old Manny Pacquiao’s next fight in September, according to RingTV. Pacquiao and his promoter Bob Arum had tunnel vision in wanting to just face Juan Manuel Marquez next, but with the Mexican warrior talking about wanting to fight other guys with titles, Bradley is suddenly starting to look like a viable option for the Filipino.

It also doesn’t hurt from the fact that Bradley looked so incredibly beatable last Saturday in winning a controversial 12 round unanimous decision over Ruslan Provodnikov in a fight that was ultimately decision on three missed called by the referee Pat Russell by failing to score a knockdown of Bradley in the 1st, a knockdown in the 2nd when Bradley was sent flying against the ropes from a big shot from Provodnikov, and another 10-8 round in the 6th when Bradley was out on his feet and taking terrible punishment.

Pacquiao’s promoter Michael Koncz said that Pacquiao’s next fight won’t be tied to any one network, and that they would do what’s best for Pacquiao. However, Arum has since commented to RingTV, saying “We have a contract [with Pacquiao] until the end of 2014, and it provides clearly that his decisions are ours and ours alone. Manny will fight on HBO and HBO pay per view from now until as long as our contract is in effect.”

Pacquiao can come out smelling like a rose if he faces Bradley next and wipes him out in two or three rounds. All Pacquiao has to do is make sure he stays close to him and don’t stop punching the way that Provodnikov did after hurting him in the 2nd. Provodnikov gassed out and really didn’t get his second wind until the 6th. Provodnikov continued to look like a tired fighter until the 11th when his trainer Freddie Roach lit a fighter under his backside by threatening to stop the fight. It was only then that Provodnikov started fighting well again.