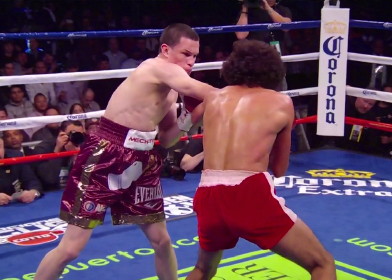 According to Steve Kim, Frank Espinosa, the manager for the 32-year-old De Leon, is confirming that Velez is pulling out of the fight with De Leon. There’s no word about when the two will be fighting.

This kind of thing has been really boxing recently with a number of fights being postponed due to injury, such as the Kell Brook vs. Devon Alexander fight, Andre Ward vs. Kelly Pavlik and Danny Garcia vs. Zab Judah. It’s just bad luck, and it’s weird because these injuries have happened in a short period of time.

Velez stands in the way of a potentially big fight for De Leon against former two division world champion Abner Mares, who is interested in facing De Leon. But for that fight to happen, De Leon will have to get past Velez, and that’s not going to be easy because Velez, 24, is a huge puncher, and he’s considerably younger than De Leon.

Some boxing fans feel that De Leon has enough still in the tank to beat Velez, but he’s failed against the likes of Yuriorkis Gamboa and Adrien Broner in the last three years. De Leon ia good enough to beat guys like Antonio Escalante, Jhonny Gonzalez, Cornelius Lock and Orlando Cruz, but he’s failed against Juan Manuel Lopez. In other words, De Leon struggles when he’s put in with guys with good power.

Hopefully Velez will be able to get back in the ring soon so the fight with De Leon can still be salvaged. It might be tempting for De Leon to take the fight against Mares right now, but with Velez and De Leon having a sign contract for fight, he obviously can’t do that.

Haye works with Ukrainian paper to get Vitali fight »