Chavez Jr. to possibly be trained by Robert Garcia; Beristain turns down offer 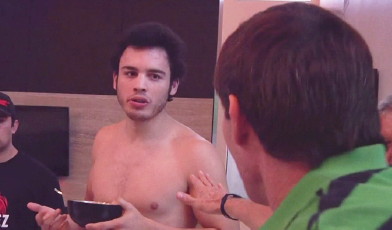 By Dan Ambrose: Legendary trainer Nacho Beristain has reportedly turned down an offer to train former WBC middleweight champion Julio Cesar Chavez Jr. due to the offer being what he considers a poor one.

Beristain doesn’t say what the offer was but it was low enough for him to be upset about it. Chavez Jr. could be heading towards Oxnard, California to be trained by Robert Garcia. According to the Koncrete Jungle, Chavez Jr. and Garcia are close to making a deal.

Beristain had this to say about his offer from Chavez Jr. as quoted by the Koncrete Jungle: “I charge to train…I can’t speak about money, but I can say it was a miserable offer. I know people in the United States that would be willing to train him for that money. Anyone that decides to train Chavez Jr. has a tough road ahead of him.”

Beristain is the trainer for Juan Manuel Marquez, and he’s trained many other former world champions. The offer must have been really low for Beristain to call it a “miserable offer.” However, it’s just as well that Beristain didn’t get the job because it might have been a short partnership if Chavez Jr. decided to skip training sessions and/or deciding to have training sessions at home instead of the gym.

I highly doubt Nacho would put up with that for very long without walking out. Chavez Jr’s previous trainer Freddie Roach put up with before Chavez Jr’s recent loss to Sergio Martinez, and it was more than a little embarrassing for Roach because the HBO cameras caught a lot of what went on behind the scenes in the Chavez Jr-Martinez 24/7 episodes on HBO.

Garcia is a good trainer but I’m not so certain that he’ll go for the idea of training Chavez Jr. at his house or deal with him blowing off training sessions. Perhaps he won’t have any problems with it but my guess is he will.

Chavez Jr. will be finding out what his suspension will be next month when the Nevada State Athletic Commission will meet to decide his case for his positive marijuana test last September from his fight against Sergio Martinez.

When Chavez Jr. does return to the ring he could be fighting Matthew Macklin to get ready for a rematch against WBC middleweight champion Sergio Martinez next September. However, the rematch between Chavez Jr. and Martinez will be a difficult one to put together because Martinez is insisting on random drug testing while training for the fight. It’s unclear whether Chavez Jr. will agree to blood testing during the preparation for the fight.

« Robert Guerrero isn’t a sure thing win for Mayweather

Hatton: I don’t want to see a fifth Pacquiao-Marquez fight »