Khan: I want to finish off the 140 lb division, and then move up to 147 to face Mayweather 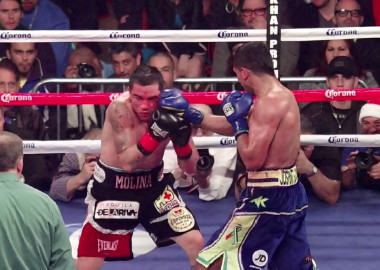 By Scott Gilfoid: Former IBF/WBA light welterweight champion Amir Khan (27-3, 19 KO’s) has lost two out of his last three fights, and is coming off of a 10th round TKO win over Carlos Molina last Saturday. Khan believes he’s a man on a mission who will now move forward to beat the top light welterweights and then move up to 147 to face Floyd Mayweather Jr. and win some of the titles before retiring at 28. Talk about your pipe dream.

Khan said to the Dailystar.co.uk “It’s all about finishing off the light welterweight division, becoming a world champion again, leading that and moving up to welterweight and winning a couple of world titles…having big fights against the likes of Mayweather.”

I’m wondering what Khan considers “finishing off” the 140 pound division means? Does it mean he beats Molina, then someone like the recently knocked out Josesito Lopez followed by Danny Garcia. If that’s what Khan considers cleaning out the light welterweight division then I’m sorry but that’s not cleaning anything out.

If Khan can beat Lopez and Garcia, those are some pretty good wins, but that still leaves Lamont Peterson and Lucas Matthysse that Khan would have to beat in order to actually clean out the division, and I don’t see Khan beating either of them and nor do I see him beating Garcia.

With Khan it all seems like a pipe dream. He talks about fighting Mayweather after having lost two out of his three fights. Khan won his last fight, but look who they had to dig up for him to finally stop his losing streak. They found an undersized, weak-punching lightweight in Carlos Molina. They basically handed Khan a victory, and Showtime televised it instead of demanding that Khan fight a quality opponent like HBO likely would have done. That was a really bad product that Showtime gave to boxing fans by televising Khan’s mismatch against Molina. Talk about your boring one-sided fights. I know I’m getting off track, but Khan was allowed to have his mismatch televised in front of the entire U.S and that’s sad.

Khan isn’t going to be fighting Mayweather unless Mayweather is cool with fighting a guy that gets destroyed by Garcia in their rematch and whoever else that Khan fights who is any good. Put him in with Matthysse, and I see Khan losing to him as well. I don’t think Khan will ever fight Matthysse. I think if Khan is lucky enough to beat Garcia in a rematch, he’ll bail from the light welterweight division, and claim that he’s cleaned out the 140 pound division as he moves up to 147 to try and land a Mayweather fight.

« Lucas Matthysse – Henry Lundy battle it out on January 26th

Ward vs. Pavlik, Arreola vs. Stiverne possible for March 2nd in Carson, California »