I’m a Marquez fan, but here is why I want Pacquiao to win 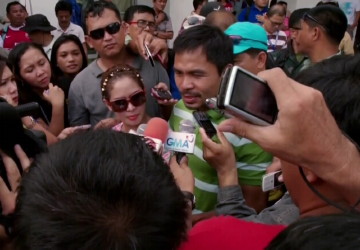 By Hector Gonzalez: If there were a fighter who has had to go threw the trenches to be recognized it would have to be Juan Manuel Marquez. When I think about Juan Manuel Marquez, I think of him as greatness that was not allowed to shine. Pacquiao will always overshadow Marquez’s greatness, but fans need to remember that the first time Marquez and Pacquiao met in the ring, Marquez was already 30 years old.

Already a veteran of the sport who, for the larger part of his career, was overshadowed by Erik Morales and Marco Antonio Barrera. The best analogy to encapsulate Marquez is; a fighter who you could hear think in the ring, a true chess player in the sport of boxing.

For hardcore boxing fans, there is a lot to be displeased about when talking about the Marquez/ Pacquiao trilogy but that is here nor there. For the record I do believe that within the trilogy it’s Marquez who should have had his hands raised… But at this time we’re going to have to set aside pride and see the larger picture.

In boxing the greatest key is not speed or power… it’s timing! And just like in boxing, life also seems to carry the same law of synchronicity, as unfair as it may seem, this is simply Pacquiao’s time.

Every great athlete embodies the times they were in, a symbolic representation of their time; Jackie Robinson, Muhammad Ali, Pele… Manny Pacquiao carries the same weight in that regard. In a time when we don’t have true heroes or true symbols of great virtue, well, there is Manny Pacquiao.

There is a legacy waiting to be written that could only have one ending. The battle of the ages, Good vs Evil, and by this I mean Manny Pacquiao vs Floyd Mayweather.

All the hardcore avid followers of boxing will always remember Juan Manuel Marquez, some of us will even remember him as the guy who had Pacquiao’s number. Years from now, in random bars his name will be mentioned every now and then by random fanatics of the sport.. and that’s okay! This is Pacquiao’s time!