Can Pacquiao handle another beating from Marquez? 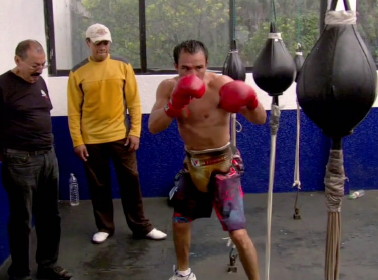 By Chris Williams: If you saw the last two fights between Manny Pacquiao and Juan Manuel Marquez you may have noticed how much punishment Pacquiao took in terms of head shots from the hard hitting Marquez in both of the fights. Personally, I can’t remember ever seeing Pacquiao hit that many times in his previous fights with anyone.

It looks like Marquez was able to hit Pacquiao more in those two fights is because Pacquiao’s mobility has really slowed since last year for some reason.

Turning 33 seems to have done a job on Pacquiao because his legs where gone for the most part and he’s taken some terrible shots in those fights culminating with him getting knocked out in the 6th round by Marquez. When I say knocked out, I mean knocked completely out.

Pacquiao’s promoter Bob Arum wants to get him another brain scan at a clinic in Las Vegas, Nevada to make sure that he’s okay to fight again. However, we won’t know what will happen with Pacquiao when he gets into the ring with Marquez for a fifth time. Arum wants that fight and he’s not planning on letting the Filipino have any tune-up bouts to make sure that he’s not beaten up from the previous fight.

Marquez is going to be even better in the next fight than he was in this one, as he’s going to work his power even more with his strength coach Angel Heredia. Pacquiao is going to be taking shots and anything is possible at this point.

Two of the sports wisest experts Oscar De La Hoya and Bernard Hopkins both think that Pacquiao may have problems coming back from his loss to Marquez. I’m sure neither of them would recommend that Pacquiao fight Marquez again right away for a fifth time without a really long break and some tune-ups to evaluate where he’s at after the knockout.

If Pacquiao gets hurt in his next fight against Marquez there’s going to be a lot of finger pointing for those up high for letting the fight take place without having Pacquiao take a tune-up to see if he can handle getting tagged in the head. I’d hate to see Pacquiao fight Marquez and get seriously hurt if it can be avoided by testing Pacquiao out ahead of time against some scrub opponents.

« Froch: I know I can beat Ward and Kessler to avenge my defeats

Pavlik vs. Bute possible for March; Andre Ward not ready to fight »