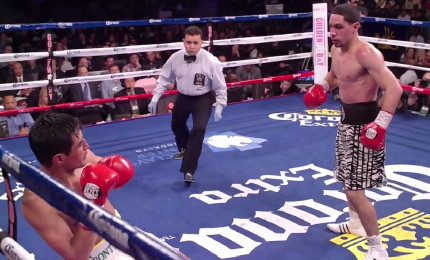 Now, as much as it irks me to no end to see Zab receive yet another undeserved title shot, truth be told, that’s like the 5th thing wrong with this equation. Although I won’t go into a melatonin evoking tirade about them, I will however beg the question, why Judah? Why not Brandon Rios or Josesito Lopez? Or, here’s an idea. How about WBC mandatory challenger Lucas Matthysse?

Now, I realize that Mr. Judah is a name and puts butts in seats, specifically in New York; where this bout will be taking place. But I am forced to ask yet another question. Must we be forced to wait yet another year for the WBC Super Lightweight champ to fight his mandatory challenger and interim champion, only to have that bout not even take place? With Garcia already scheduled to take on Judah in February, it’s beginning to look like the answer to that question is a deplorable yes. You see, at the moment, that number one contender is heavy handed Argentine Luca Matthysse (32-2-1). Matthysse earned his spot atop the heap of contenders at 140lbs by defeating previously unbeaten and previous number one contender Olusegun Ajose.

Matthysse defeated Ajose by sensational TKO in the 10th round in a thrilling title eliminator bout back on September 8th. Here’s where it gets a little funny. Ajose, prior to his loss to Matthysse, was the number contender for the WBC Super Lightweight title. He earned that spot by outlasting Ali Chebah in a twelve round war of attrition, winning a unanimous decision and twice dropping Chebah in the process. This bout took place on September 30th, 2011. Yes, you read correctly, 2011. Ajose was over overlooked for a little under a year, during which time we saw the title inexplicitly stripped from Timothy Bradley, awarded to Erik Morales for defeating Pablo Cesar Cano, only to lose it in his next outing against current champion Danny Garcia. All this, while Ajose watched from the sidelines twiddling his thumbs resembling a 4th grader eagerly awaiting his turn at handball.

Not speaking from experience or anything, just saying. And how was Ajose rewarded for his patience you ask? Well I’ll tell you, he was placed in a bout with the aforementioned Matthysee. So, it seems as if Matthysse didn’t do himself any favors by beating Ajose either, he essentially took Ajose’s place in line. When will the insanity end? Unfortunately I don’t have the answer to that question. What we can do with this predicament is make the best of it and hoping for the best by tuning in to see if the slick southpaw Judah can shock the world as he once did back in 2005 when he defeated Cory Spinks to become the legitimate Welterweight champion of the world. “Swift” is a young undefeated champion, so I’m willing to allow Garcia a freebee. Unfortunately for him, he just used that freebee for his rematch with Morales.

A few more opponents like this and sooner or later he’s going to earn another title, can crusher. We can only hope that Lucas Matthysse doesn’t fall into the same complacency that Ajose did. Because if a potential bout between Garcia and Matthysse doesn’t come to fruition, it would truly be a tragic, tragic shame, as the Super Lightweight is a talent-laden division. This bout has fight of the year written all over it, whichever year it occurs in, should it occur to begin with. I can only pray to the boxing gods that this fight is signed in the not too distant future, because if it does, we’ll be watching.

Deontay making a huge step forward in his career against Price »