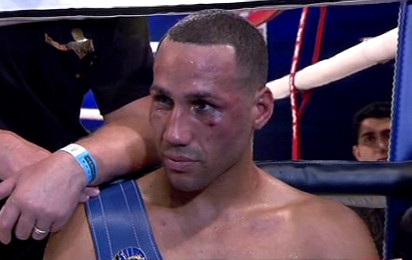 By Scott Gilfoid: EBU super middleweight champion James DeGale (13-1, 9 KO’s) will be holding onto his Euro strap for a little while longer as he defends the belt against #7 WBC Mouhamed Ali Ndiaye (22-1, 13 KO’s) January 26th, according to Boxrec.com.

DeGale, 26, will be facing the 33-year-old Ndiaye at the Glow, Bluewater, Greenhithe, Kent, United Kingdom. Depending on how well things go for DeGale he could be facing an even tougher struggle than in his last bout when he went life and death with Hadillah Mohoumadi last October in earning 12 round decision that was ultimately a lot closer fight than the judges scored it.

I had the fight a draw or if anything a small victory for Mohoumadi, but ignoring the outcome of the fight altogether it’s agreed that DeGale really stunk in that fight.

DeGale, #4 WBO, #5 WBC, #6 IBF, didn’t look any better than Mohoumadi, and that’s troubling because this is someone that DeGale was expected to handle with ease because the best fighters at 168 would have no problems with this guy. But DeGale got walked down by him and spent a lot of the fight on the ropes getting tagged. It was kind of sad to see DeGale trying to showboat off the ropes with his face badly swollen from Mohoumadi’s hard shots. It was like DeGale didn’t realize how bad he looked and thought he was impressing fans.

Ndiaye has won his last nine fights since getting beat by Lolenga Mock in March of 2008. It’s hard to know how many losses Ndiaye would have if he had been facing quality opposition like Andre Ward and the Dirrell brothers instead of the guys he’s been facing.

In looking at a few of Ndiaye’s fights on Youtube I think DeGale is going to have some problems against him and I see this a pick em fight that could go either way. Ndiaye is nothing special but then again neither is DeGale.

« Pacquiao: I’m going to throw a lot of punches against Marquez