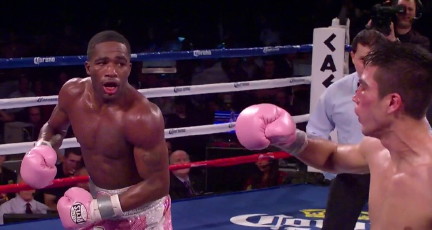 By Gareth Rees: Adrian Broner (25-0, 21 KO’s) won his second world title in a second weight class as he destroyed Antonio DeMarco (28-3-1, 21 KO’s) in an 8th round TKO stoppage to win the WBC Lightweight title. Throughout the fight it was obvious that Broner was a different class compared to DeMarco.

The first three rounds were quite tight as Broner was patient sticking behind his jab and defending well as always, with the southpaw DeMarco gaining very occasional success focusing on a body attack. But from the 4th round onwards Broner went up through the gears and started to really batter DeMarco with his pin-point power punching, landing on average 39 power punches per round between rounds 4 and 8. The fight ended when Broner landed a powerful combination to both head and body, finishing with a right uppercut to the head of DeMarco sending him to the canvas. At that point DeMarco’s corner had seen enough and waved the towel to stop their fighter taking anymore punishment.

This performance has gained rave reviews by everyone who witnessed it with Gary Shaw, DeMarco’s promoter being one of the most vocal and gave Broner extremely high praise. He described Broner as “the best lightweight I’ve seen in recent times.” He added “If the press isn’t ready, I will crown him the next Floyd Mayweather. He’s that good. He has a total game, the shoulder roll, the defense.” Oscar De La Hoya then said “He could go up to 154 if he wanted to, that’s how special he is.” De La Hoya then said “The great thing about Broner is that he will fight anybody. From what I saw tonight, who else could he fight at 135 that could give him a challenge? He could unify if he wants to. He should just fight the very best, he’s ready for it.”

This brings us on to a possible unification fight with British WBO champion Ricky Burns who has previously stated that he would like to face Broner. Last night Broner stated a similar intent saying “Burns will get burned”, when asked who he would like next. It must be pointed out though the one negative I took from the fight is the fact even when the fight was stopped DeMarco didn’t look too hurt considering the amount of damage he had received.

But I must admit Broner has gone up in my books with this performance. I still have my reservations about Broner as I feel although he is undeniably talented, he does get a lot his own way, as in his previous performance against Vincente Escobedo, I lost a lot of respect for him with his attitude at the weigh in, coming in so far over weight.

Being from the UK I would love to see a Broner-Burns fight in early 2013, especially if it was in the UK just to see if this takes Broner outside of his comfort zone, but I strongly doubt this will happen. With a mix of Frank Warren being known for being overprotective of his star fighters and finding weak opponents for them, and then Adrien Broner having a very powerful manager and promoter, if the fight did happen it would most likely happen in America probably Las Vegas.

« Seth Mitchell gets stopped in two by Banks

Deontay Wilder now the #1 heavyweight in the U.S »