Deontay Wilder now the #1 heavyweight in the U.S 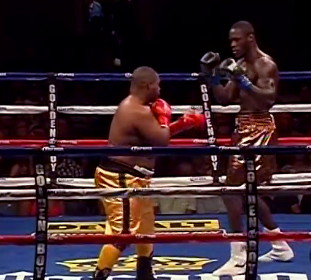 By Scott Gilfoid: With the 2nd round knockout loss of previously undefeated Seth Mitchell last Saturday night at the hands of Johnathon Banks, it leaves undefeated Deontay Wilder (25-0, 25 KO’s) as the top #1 heavyweight in the United States. I never saw Mitchell as a better heavyweight than Wilder, but now that we’ve seen him get exposed by Banks it’s now academic that Wilder is the top guy.

This really isn’t news to some of the top boxing experts in the sport because legendary trainer Emanuel Steward recently said that he saw Wilder as already the top heavyweight in American in an interview with RingTV, saying “As far as the American fighters, he’s No.1 to me among the American heavyweights. I think that he could step up and challenge in one year.”

If Steward believed that Wilder is the best heavyweight in the U.S then that’s good enough for me because Steward was a genius at spotting talent.

Wilder has a fight coming up next month against a dangerous Kelvin Price (13-0, 6 KO’s) on December 15th at the Sports Arena, in Los Angeles, California, USA.

This is going to be Wilder’s coming out party of sorts because the fight will be aired on Showtime and Wilder is going to be seen by many Americans in this performance. It’s going to be something special from him and I’m expecting him to score an early knockout to continue his knockout string. Wilder is heading for a world record for KOs for a heavyweight. The record is 44 consecutive knockouts and is held by Lamar Clark, and Wilder isn’t too far off from tying and then eclipsing that mark.

I would have liked to have seen how Wilder would have done against Mitchell. It’s too bad Mitchell got exposed before Wilder got a chance to show him his stuff. Banks is a good heavyweight but let’s be real here. He’s only 6’2″ and that’s just too small for a heavyweight like the 6’7″ Wilder. It wouldn’t be a competitive fight due to the size dimensions.

Shaw: Adrien Broner can be the next Mayweather Jr »