Broner, Froch, Bellew, Banks: What did we learn? 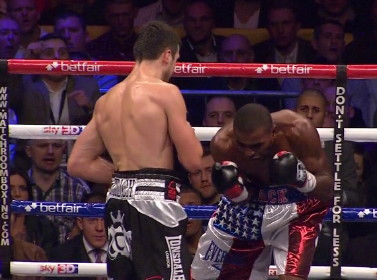 By Rusty Nate: Well after a wonderful weekend of fights what did we learn from it all? We’ll start at the bottom and work up……

I think this was an amazing fight. Not because it was full of knock downs or because they both went to out and out war but because it showed us a HUGE amount about the character of Tony Bellew.

He is a fighter that I believed had solid skills but loved to bang. Well I still think that is true but what I saw in Saturdays fight is a man who can come out with a game plan which appeared to be working well, suffer an awful gash above his eye in round 3 and then completely change his game plan in order to protect his eye yet still dominate his higher ranked opponent. What a great performance from Bellew, well done sir!

For any of you that read my article on Friday regarding the weekends fight you would have seen that my prediction was for this fight being the only potential for an upset over the weekend. Well it did not disappoint at all. I think this fight showed us that there is a game fighter in the heavyweight ranks that I imagine would fight anyone and certainly give them a great test for as long as it lasts.

It was a good fight and exciting to watch between these two. But what we saw was 2 fighters that are far to open and easy to hit. The real top guys in the division will spot this and exploit it badly!

Well no surprises here then. Mack has always struggled with pressure fighters coming forward and Froch is pretty much the best pressure fighter in the division so as expected a KO win for the Cobra. I think I had predicted it by rounds 4-6 but in traditional Froch style he came out at 100 miles hour and ended it sooner. So what does this fight show us?

Well we knew what Froch was about his entire career so that’s nothing new however what I did see in this fight and in the last against Bute was a reinvigorated fighter in Froch, he looks like he loves the sport again, he looks like he is in the best form of his career and more importantly he looks like he would beat at least Bute and Kessler, if his plans go forward as he would like this could be a huge year for Froch and the rest of the Super Middleweights………Bute, Kessler, Ward that’s the plan for Froch.

As much as it surprises me that I am saying this….WOW!

I am not a huge fan of Broner because of his attitude towards himself. He has a personality as big and as self centered as Floyd Mayweather a lot of the time and to be honest in previous fighters I felt he looked like a poor carbon copy of Mayweather. This fight may have changed my opinion completely. Don’t get me wrong I am still not a fan of the vanity he displays or the apparent disrespect for opponents pre-fight but I was completely blown away by the performance on Saturday night. Broner looked like he had fought at lightweight his entire career. He looked physically strong, powerful with every punch he threw and very very tough to hit.

I don’t think his defensive skills are quite that of a prime Mayweather but he is certainly getting there. Having seen Demarco handle Valero’s power punching for 9 rounds I certainly wasn’t expecting Broner to look like he was a harder puncher but I think speed and accuracy was the key here, Demarco simply did not see the punches coming!

Will Broner step straight up another weight or should he fight the champions at Lightweight?

Overall a great fight weekend. Roll on the 24th November. I will be ringside at Hatton’s return, soaking up the MEN Arena’s amazing atmosphere and hopefully seeing some great fights up close.

Hearn: Bute or Stevenson will be next for Froch »