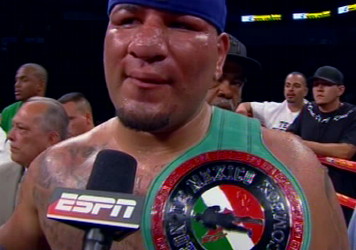 The winner of the Stiverne vs. Arreola could end up with the WBC title if the current champion Vitali Klitschko retires or if the winner of this Saturday’s WBC heavyweight eliminator bout between Tyson Fury and Kevin Johnson decide to go in a different direction.

Arreola has to be considered the favorite in this fight because of his experience and his ability to throw combinations. Stiverne is more of a one punch at a time fighter, and that hurts him because he would be a much beter fighter if he put his punches together.

Stiverne, 34, is ranked #2 by the World Boxing Council but he’s not faced anyone in the class of Arreola. Stiverne has blown through most of his opponents since suffering a 4th round knockout loss to journeyman Demetrice King five years ago in 2007. That was a big of a shocking loss for Stiverne because this was thought to be an easy fight for him. But since then, he’s won 10 of 11 fights with one of them a 6 round draw against Charles Davis.

Arreola, 31, would seem like the better fighter compared to Stiverne. However, Arreola can be hurt and Stiverne definitely has the power to take hi out if he puts it on him early. Arreola has turned his career around in the last couple of years after getting beaten by WBC heavyweight champion Vitali Klitschko and Tomasz Adamek.

Arreola has now won his last seven fights and gotten control over his weight, which had ballooned upwards to as high as 263 in 2009. Fighting in the 240s now, Arreola isn’t quite as powerful as he once was, but he’s faster and can throw more shots.

Fury vs. Klitschko will be a stadium fight in May, June or July, says Hennessy »