Deontay Wilder: Wladimir told me I’m the fastest heavyweight he’s ever been with 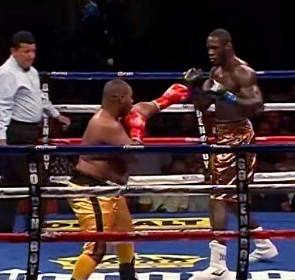 By Scott Gilfoid: Looks like the talented heavyweight prospect Deontay Wilder (25-0, 25 KO’s) is really making a name for himself in his camp with IBF/IBO/WBA/WBO heavyweight champion Wladimir Klitschko because Wladimir has been smothering the young 26-year-old Wilder with compliments after sparring with him a number of times.

Deontay said this on his twitter today about Wladimir: “The champ@Klitschko [Wladimir] reminded me why I’m the future star again today after sparring. I appreciate the great words. [It] really meant a lot. He told me I was his main man and that I was a very good boxer, [and] that I’m the fastest heavyweight he’s ever been in the ring with and he’s so happy I’m here.”

The 6’7″ Wilder has quickly become Wladimir’s #1 sparring partner to get him ready for his November 10th fight against the 6’7 1/2″ unbeaten Mariusz Wach of Poland. Wladimir needed a huge heavyweight that was around the same size a Wach, and Wilder obviously stood out among the other available huge heavyweights that Wladimir could work with to get him ready for this fight. However, Wilder is so much more talented than the slow footed, slow-handed Wach that it’s not even funny.

Wladimir may find that he’s too well prepared if you know what I mean. Wilder’s hand speed is much better than Wach’s, and his right hand is out of this world. When it comes to the actual fight, Wladimir may need to make some adjustments to Wach’s much slower right hands and left hooks compared to Wilder’s. It’s a good thing that Wladimir is training with the most powerful heavyweight in boxing with the young Wilder. The only thing is Wladimir will have to adapt to Wach’s slower hands because he’s nothing like Wilder. Wach is more like a guy trying to punch in a swimming pool underwater. He’s seriously slow.

It’s pretty big compliment from Wladimir that Wilder is the fastest heavyweight he’s ever been in with because he recently fought David Haye, who many people see as a fighter with really fast hands. But here Wladimir is saying that Wilder is even faster than him, and of course much more powerful. That’s a real compliment to Wilder.

Wilder faces unbeaten Kelvin Price (13-0, 6 KO’s) on December 15th on Showtime television at the Sports Arena, in Los Angeles, California, USA. Boxing fans in the United States will be getting their first glimpses of Wilder in many cases, and it should be a real pleasure for them to see the future world champion at work before he wins a world title.

« Wladimir: Haye has to learn to behave and how to fight