Deontay Wilder to showcase his boxing skills against Kelvin Price 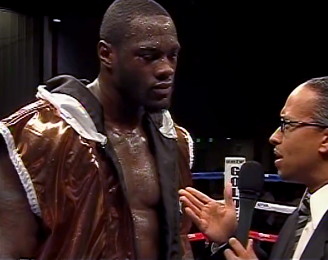 By Scott Gilfoid: The boxing world will get the pleasure of watching 6’7″ heavyweight giant Deontay Wilder (25-0, 25 KO’s) in action on December 15th as he attempts to add yet another impressive knockout to his perfect string of KO’s when he faces the 6’7″ Kelvin Price (13-0, 6 KO’s) in a true battle of the giants at the Sports Arena in Los Angeles, California. Wilder, for those who don’t know yet, is the next star in heavyweight boxing and he’s on the brink of stardom.

In 2013, the 27-year-old Wilder will be sending shock-waves through the sport as he continues his long knockout streak in the process of capturing one of the world heavyweight titles. Before all that happens, however, U.S fans will will getting their first view of the talented Wilder in many cases when they tune into watch Wilder fighting on Showtime Sports on the undercard of the Amir Khan vs. Carlos Molina fight. By next year this time, it’ll be Khan who will likely be fighting on Wilder’s undercards in the U.S as Wilder is quickly becoming a much bigger name than Khan in the United States and their careers are going in opposite directions.

Wilder has to show his stuff agaisnt Price and not look sloppy in destroying this guy, because first impressions have a way of lasting for ages. There’s no question that Wilder will KO Price, but the main concern is that Wilder has a chance to look skilled and show off his boxing ability before he lowers the boom on him. We don’t need Wilder looking clumsy or knocking him out too quickly.

Wilder has to string it out a little so that Price can at least stay around long enough for boxing fans to get a good chance to see what Wilder can do. It’s not interesting for fans when a superstar in waiting like Wilder just comes out and blasts his opponents to smithereens before they’ve had the chance to look at what Wilder can do in the ring. He’s got to be a little patient before he lays on the power on this guy.

« Floyd Sr: Pacquiao vs. Mayweather is a mismatch