Audley Harrison to fight on 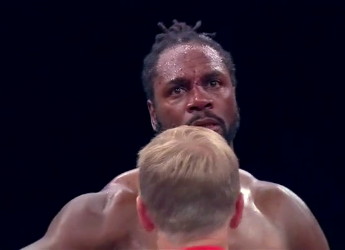 By Mark Turley: Audley Harrison, recently demolished in a minute-and-a-half by David Price in Liverpool, has stunned British fight fans by claiming divine intervention and announcing his desire to fight on. Commenting today on his Twitter page, Harrison said, “A decision has come from above. He told me son ‘lace up your gloves’ your time as a boxer is not quite done, so go out there & have some fun. Its official… I’ve decided to carry on. One more shot at glory. It could be over; next fight will tell me. See u in a ring real soon.”

His crushing defeat to Price came only two years after an abject performance against David Haye, in which Audley was knocked out in 3 rounds after failing to throw a punch. There would seem to be little appetite among the British public to watch Harrison knock out a couple stiffs before folding again against higher class opposition and many feel he may decide to pursue his career in the USA, where he now lives. Despite failing spectacularly to live up to his potential as a professional, Harrsion may still be able to trade on his status as a former Olympic Gold Medal winner to secure some paying contests, but it is difficult to imagine that at 41 he will be able to compete at anything other than ‘journeyman’ level.

Boxing is littered with stories of fighters who were unable to hang up their gloves when the time seemed right. For many it is the desire to go out on a high, or the inability to put the adrenaline fuelled excitement of entering the ring behind them. And for a great deal of them, this process ends in humiliation. If Audley Harrison’s ego dictates that he boxes again, I’m not going to hold it against him, but I certainly won’t be watching. I hope he manages to comeback without sustaining serious injury.

« Hatton vs. Senchenko: Should this be PPV?

Michael Moorer talks about his career, training Ryan Coyne and ‘Find A Dream’ »