Joshua to shoot for second gold medal in 2016 Olympics 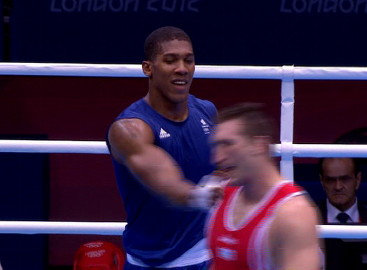 By Scott Gilfoid: Rather than turn pro and make tons of good cash, 2012 British Olympic super heavyweight gold medalist Anthony Joshua is going to stay on as an amateur and attempt to win a second gold medal in the super heavyweight division in the 2016 Olympics in Rios. By doing this, Joshua will be taking a huge risk because three out of his four wins in this years’ 2012 Olympics were highly questionable victories.

The chances are high that Joshua will have nothing to show for staying as an amateur unless he improves dramatically from where he is now. The next Olympics won’t be in Britain, so there likely won’t be huge cheering each time Joshua throws a punch. He could end up getting eliminated early in the next Olympics if fighters like Erislandy Savon and Ivan Dychko stay on as amateurs and take part in the 2016 Olympics. One person that Joshua won’t have to worry about is 32-year-old Roberto Cammarelle, who Joshua beat last Sunday in their gold medal match. Cammarelle would be 36 if he were to take place in the next Olympics in Rios, but the age limit for Olympic fighters is 34, so he’ll have aged out by then.

Joshua told thesun.co.uk “This has never been about money. I will stay amateur for as long as possible. I quite like the sound of Rios in 2016.”

Here’s Joshua’s predicament. He’s about to turn 23 soon, and if he stays on for another four more years to try for a second gold medal in 2016, it will mean that Joshua will be almost 27-years-old by the time he turns pro, and that’s if he turns pro immediately after the 2016 Olympics. That would make Joshua about the same age as Audley Harrison when he turned pro after the 2000 Olympics. Like I said, Joshua very likely won’t win the gold next time out, and might even be lucky if medals at all. There are a lot of other fighters that let their hands go in a better fashion than the stiff, and robotic Joshua. Unless Joshua’s power and speed improves before then, which I doubt, he’ll very likely get eliminated fast. Turning pro at 27 would mean that Joshua would be in his 30s by the time he fights for a world title. It would be kind of like with British heavyweight David Price, who just turned 29 recently. Price fought in the 2008 Olympics and spent a considerable amount of time in the amateur ranks.

A lot of people thought Joshua was beaten by Cammarelle yesterday, and he was very lucky to have escaped with that victory because I had Cammarelle winning easily.

Ricky Hatton could make comeback in October or November »