Cammarelle deserved to get the gold medal, not Joshua 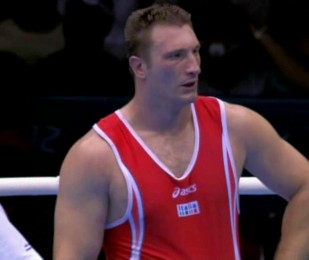 By Scott Gilfoid: You only had to take one look on the face of talented Italian super heavyweight Roberto Cammarelle to know how completely disgusted he was with the judges decision to give Britain’s Anthony Joshua the gold medal in their 2012 Olympic super heavyweight gold medal finals match in London, England.

The fight ended in a 18-18 tie, but Joshua got the win on the tiebreaker which is based on the larger scores between the three rounds. Somehow the judges had Joshua winning the 3rd round despite Cammarelle appearing to land most of the clean shots in the round.

Joshua came into the 3rd round trailing by a three points and I just don’t see how on earth Joshua did enough to make up those three points. If I was to completely ignore everything that Cammarelle was doing in the round, then maybe I could see Joshua coming back to even the score but that’s not what happened. The 3rd round was by far Cammarelle’s best round in the fight as he teed off on Joshua with big left hands and right hooks. It was beautiful to watch Cammarelle’s work. He looked great with the way he was making Joshua miss with his shots and then firing back with right hooks and left hands straight down the middle.

Cammarelle didn’t look like he wanted to shake Joshua’s hand after the fight, as he walked right past Joshua when he attempted to shake hands. Later on, Cammarelle briefly shook Joshua’s hand but you could see that he wasn’t a happy camper and who can blame him? Cammarelle fought a great fight and deserved to get his hand raised by the referee. The super heavyweight gold medal should be around Cammarelle’s neck right now in my view. I could understand Joshua getting the decision if he did the work, landed the best shots and dominated, but he didn’t. That man was Cammarelle. He looked sensational tonight and he should have been the winner.

I figured that Cammarelle needed a knockout to get the win over Joshua and unfortunately I think I was right. This was Cammrelle’s most dominating performance in the entire Olympics, and yet he lost. It’s so sad. They really need to fix the Olympic scoring because it’s bad when you have controversial decisions like this. It hurts boxing if you don’t see the right fighter getting his hand raised at the ends of fights.