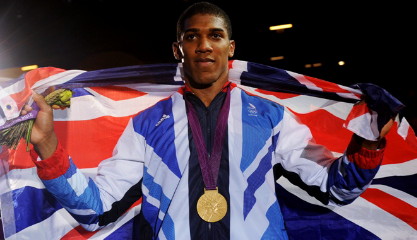 By Scott Gilfoid: For the 2nd time in the Olympic competition, Britain’s home fighter Anthony Joshua won a controversial decision in a fight he appeared to lose at home in London in the 2012 super heavyweight Olympic competition. Joshua beat 2008 Italian super heavyweight gold medalist Roberto Cammarelle by a 18-18 score, which then went into a countback tie-breaker. Joshua was given the gold based on his last round score of 8-5.

Joshua trained going into the 3rd round after having lost both the 1st by the score of 6-5 and the 2nd by the score of 7-5. The very odd thing about the 3rd round was that apart from two solid shots that Joshua landed in the round, it was all Cammarelle. He was the one throwing and landing all the shots while Joshua moved around on the outside throwing pretty much nothing. How Joshua could have gotten credit for winning the 3rd is a real mystery to me because that was by far Cammarelle’s best round of the fight. I mean, Cammarelle totally dominated Joshua in the third and it was like a pro defeating a rank amateur. I don’t agree with the decision and I certainly don’t believe that Joshua deserved the gold medal in this fight. He looked awful and deserved to lose the fight by at least 8 to 10 points. Cammarelle really dominated Joshua in the 1st and 3rd rounds. He won all three rounds on my scorecard but the 1st and the 3rd were totally dominated by Cammarelle.

Joshua pretty much did nothing but clinch and move around the ring. He did a little holding and hitting in the 2nd when he grabbed Cammerelle’s head with his left arm and held him around the neck while tagging him with hands.

I noticed that a lot of the replays that were shown on television were replays of Joshua landing shots. He would get totally dominated in the rounds and yet you’d only see replays of him landing shots and not Cammarelle.

I wonder how Joshua feels about his gold medal when a lot of people feel he lost the fight against Cammarelle along with two out of his four fights in the 2012 Olympic gold medal competition? That must make him feel kind of bad, don’t you think? I personally felt that Joshua lost all four of his Olympic fights against Cuba, China, Kazakhstan and Italy. I had him losing all four fights. His semi-final win over Ivan Dychko and his win over Cuba’s Erislandy Savon were highly questionable. Indeed, I thought they were absolutely horrid decisions.

They need to change the scoring for Olympic boxing so that we don’t get fighters getting their hands raised after questionable decisions over and over again. It taints the whole Olympic competition I feel.

« Rigondeaux will need to obliterate Marroquin

Cammarelle deserved to get the gold medal, not Joshua »