Kelvin Price pulls out of Deontay Wilder fight due to injury 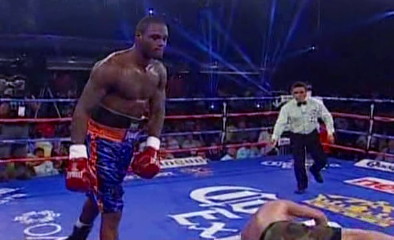 By Scott Gilfoid: Unbeaten heavyweight knockout artist Deontay Wilder (23-0, 23 KO’s) is now looking for a new opponent for his August 4th date after his previously scheduled opponent 6’7″ Kelvin Price (13-0, 7 KO’s) pulled out of the fight complaining of a rib injury, according to fightnews.com.

The 26-year-old Wilder’s promoters at Golden Boy Promotions are currently looking to quickly fill the spot vacated by Price and should have a replacement in a couple of days. The fight was going to be televised on Fox Sports Net.

Wilder, a former 2008 heavyweight Olympic Bronze Medalist for the United States, has been really impressing since he turned pro in 2008, piling up 23 knockouts in his first 23 fights. He’s still pretty raw, but he’s got amazing right hand power that makes up for his flaws in other areas of his game. His right hand power may be the best in the entire heavyweight division. He’s one of the rare fighters that has true one-punch power and if he lands his right hand flush on any fighter in the division the chances are high he’s going to KO them.

The fight against Price was going to be a step up for Wilder, who was going to be moved from eight round bouts to ten rounds. It’s kind of a meaningless thing because Wilder has been knocking everyone out in 4 rounds or less his entire career. It would be good for him to find someone that can take his power so that he can get some rounds in but there may not be anyone out there that can withstand his right hand power. Like I said, Wilder has amazing power in that right hand he might be too strong for his own good.