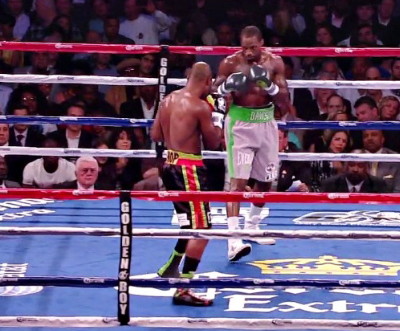 You can completely ignore the 114-114 score because that was just plain sad to see how out of touch that judge was with what happened in the ring tonight. There’s always at least one judge that goes against what the boxing public see in a fight.

Dawson dominated the entire fight, picking off the slower, older Hopkins with jabs, right hooks and straight left hands all night long. Hopkins rammed heads with Dawson in the 4th, opening up a big cut above Dawson’s left eye. However, Dawson’s corner was able to take care of the cut so that it wasn’t a real problem in the remainder of the fight.

Dawson constantly pushed the fight to the aging Hopkins and had him running all around the ring using all kinds of tricks to try and get an advantage. At point in the fight, it looked as if Hopkins was going to dive out of the ring. Hopkins later on tackled Dawson late in the fight in the 11th, showing his desperation.

In the 8th, Dawson sustained a second cut, this time above his right eye. However, it wasn’t from a head clash in this case but from a right hand from Hopkins.

Hopkins tried hard to get back into the fight in the last three rounds, but he was met with heavy resistance and really punished.

Undefeated heavyweight contender Seth Mitchell (25-0-1, 19 KO’s) survived an early onslaught from Chazz Witherspoon (30-3, 22 KO’s) to get a stoppage in the 3rd round. The fight was halted at 2:31 of the 3rd round shortly after Mitchell knocked Witherspoon down.

Shockingly, Witherspoon really took the fight to Mitchell in the opening round and had him hurt as he was unloading on him with shot after shot. To Mitchell’s credit, he was able to survive the round and come back in the 2nd round to dominate the action. However, it wasn’t a good sign that Mitchell was getting blasted by a limited 2nd tier heavyweight like Witherspoon

It’s good that Mitchell was able to come back, but he’s clearly not ready to face the Klitschko brothers or any top five legitimate contender. I think he’d have been in deep trouble had he been in with someone that could fight.