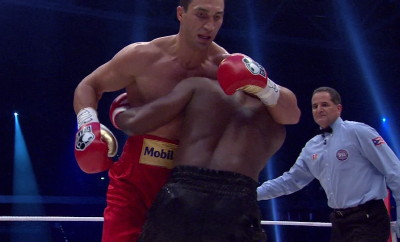 By Sean McDaniel: 39-year-old Jean-Marc Mormeck (36-5, 22 KO’s) fought as if he were 49 last night in losing by a 4th round TKO to a very cautious IBF/WBA/WBO heavyweight champion Wladimir Klitschko (57-3, 50 KO’s) in Dusseldorf, Germany. Mormeck landed an average of one punch in each round of the fight and looked completely out of his class in the fight.

Had Wladimir put his foot to the floor in the 1st round, I have no doubts that he would have stopped Mormeck in the that round. However, he looked too timid and just seemed afraid to get hit for the most part. I believe that former WBA heavyweight champion David Haye would have made quick work of Mormeck had he been in there with him instead of Wladimir.

With Haye, he wouldn’t done all that clinching that Wladimir did. Haye doesn’t like to clinch, so if he and Mormeck came in close like that, Haye would have clubbed him with some big shots on top of the head and I think Mormeck wouldn’t have been able to handle those shots. I know Haye stopped Mormeck in the 7th round in November 2007, a fight in which Haye hit the deck in the 4th round. However, Haye is a lot stronger at heavyweight, whereas Mormeck just looks like a cruiserweight out of his division. It was crazy for Mormeck to move up in weight in the first place because even at cruiserweight, he was small for the weight. Last night, Mormeck looked pint-sized against the towering 6’6″ Wladimir.

I could see Haye stopping Mormeck in the first sixty seconds of the fight. As soon as he felt that Mormeck had no power at this fight, Haye wouldn’t have given him any respect and would have opened up with a flurry of power shots that would have saw Mormeck hit the deck. I know Mormeck would have gotten back to his feet but it would have been worse because Haye is a good finisher and would have buried Mormeck with punches at that point.

It’s a pity that Wladimir couldn’t resist holding onto Mormeck do much because this was a fight that he could have easily won quickly if he had not clinched so much.

« Burns defends his WBO strap against Moses this Saturday

Cotto has it tough against Mayweather »