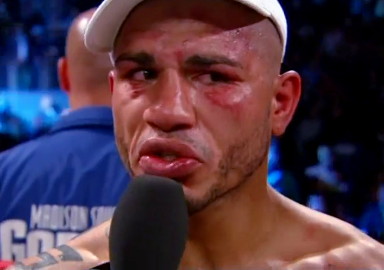 By Dan Ambrose: Before World Boxing Association (WBA) junior middleweight champion Miguel Cotto (37-2, 30 KO’s) defeated Antonio Margarito earlier this month by a 10th round doctor’s stoppage, EPSN analyst and trainer Teddy Atlas believed that the 31-year old Cotto was damaged goods from the beatings he took in his loss to Margarito in 2008 and his beat down against Manny Pacquiao in 2009.

I think it’s pretty clear that Margarito came into the Cotto fight in bad shape in terms of his recently surgically repaired right eye, and I agree with Margarito wasn’t the same fighter he was before the eye injury. This made things a lot easier for Cotto because all he had to do was throw punches at Margarito’s bad eye and it quickly started closing.

Former Nevada State Athletic Commission medical advisory board chairman and chief ringside physician Dr. Margaret Goodman feels that Margarito should never have been licensed to take the fight due to the serious eye injuries that he had suffered in the Pacquiao fight, according to an article she wrote at Ringtv.

Margarito was potentially risking a serious injury by going out and facing Cotto, and there’s no doubt that he wasn’t the same fighter. Cotto did well at hitting and moving like he did in the first fight three years ago. However, even with only one good eye, Margarito was starting to get to Cotto in the 9th round and looked to be wearing him down for another knockout. Had there been no injury that caused the stoppage of the fight, Cotto possibly would have been knocked out again.

Is Cotto’s win over Margarito proof that he’s still at the top of his game and should be considered the best fighter in the junior middleweight division or does this just prove that Cotto can beat a fighter who came into the fight coming off of a serious eye injury and who arguably shouldn’t have been permitted to fight according to some doctors.

Vitali wants Haye bout in June 2012, willing to fight him in England »