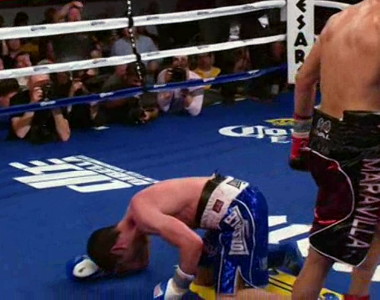 By Scott Gilfoid: World Boxing Council Diamond middleweight champion Sergio “Maravilla” Martinez (48-2-2, 27 KOs) handed Darren Barker (23-1, 14 KOs) his first defeat of his career on Saturday night in stopping the Brit in the 11th round at the Boardwalk Hall in Atlantic City, New Jersey.

Martinez flattened a badly hurt Barker with a beauty of a right hand in the 11th, leaving the broken Barker on the canvas.

Martinez took his time with Barker much in the same way Martinez did in his win over Kelly Pavlik a year ago, letting Barker get some confidence in the first half of the fight using his soft jab and slow right hands.

Just when Barker seemed to think he had a chance to win, Martinez put his offense into overdrive starting in the second half of the fight, nailing Barker with hard combinations to the head and body.

It was the combination punching that seemed to wilt the Brit, taking all the energy out of his body with each huge shot. By the 11th, Barker was just a spent force from one too many big shots from Martinez.

Seeing that Barker was just a punching bag, Martinez decided to finish him off with a powerful combination that had Barker literally out on his feet when he flattened by a big right from Martinez.

Martinez could have taken out Barker much earlier but used the early part of the fight to let Barker expend energy. Once the fight got to the crucial rounds, Martinez stepped on the gas and showed his talent. Barker didn’t have the strength, the energy or the talent to keep up with Martinez once he got his offense in gear.

Now Martinez can start looking to get some interesting fights, perhaps against Floyd Mayweather Jr. or Julio Cesar Chavez Jr.