Hearn hopes to get Barker another world title shot in 2012 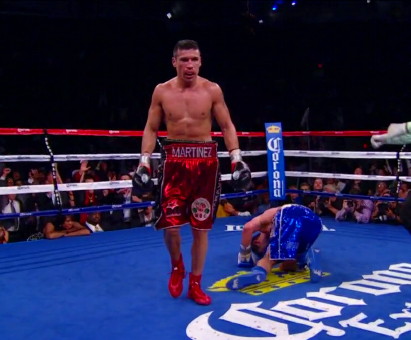 By Scott Gilfoid: Eddie Hearn, the promoter for Darren Barker (23-1, 14 KO’s), says he’s going to try and get the 29-year-old Barker another title shot in the near future, hopefully in 2012. Hearn believes that he can take advantage of Barker’s good showing in his 11th round TKO loss to WBC Diamond middleweight champion Sergio Martinez last Saturday night.

Hearn said “He has made a name for himself and I will get him another shot in 2012, but for now we should get behind him for putting it on the line. But his only options are IBF champion Daniel Geale and WBO belt holder Dimitry Pirog, two fighters that Barker wouldn’t match up well against of their constant movement and unorthodox throwing angles.

I can’t see Barker beating either of those guys even if Hearn does get him a fight against one of them, which I highly doubt. My guess is Barker will get another crack at a world title in 2013 provided that he doesn’t get beat again. He’ll have to be matched carefully because he doesn’t offer much in the way of offense other than a predictable jab and occasional right hands. He’s no dynamo on offense and against more accomplished fighter in that area, Barker will be facing a likely second knockout loss. Martinez really didn’t hit Barker with a very big shot to score his knockout. There’s guys that would hit Barker a lot harder than that, and if his chin is as soft as butter, he’ll get knocked out.

Barker said “After eight rounds I felt so in control and felt I had the beating of him.”

Barker wasn’t winning after eight rounds. He was losing, because he wasn’t throwing enough punches. He was just playing it safe and jabbing. But maybe that’s why he got battered from the 8th round on, because he thought he was winning. If I was his trainer, I’d have told him ‘Hey, you’re losing the fight. Get up off your backside and start fighting for a change instead of just playing it safe with the jabbing.’ Unfortunately, Barker continued to do little other than jabbing until getting smashed with a right hand in the 11th that toppled Barker over.

« Will Marquez be competitive against Pacquiao?

Toney vs. Lebedev signed for November 4th at 200 lbs »