Barker: My hands are as quick as his [Martinez], I will show him what a quick middleweight I am 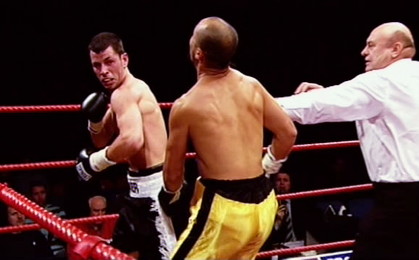 By Scott Gilfoid: I had a laugh reading one of Darren Barker’s recent self-promoting quotes about himself at thesun.co.uk this morning where Barker describes his talents as such: “My hands are as quick as his [Sergio Martinez], I am more elusive and bigger in stature than him. I will exploit his weaknesses with my size and just sow him what a quick, tough, powerful middleweight I am.”

This is hilarious stuff. That reminds me of when a completely overmatched heavyweight opponent Peter McNeeley, picked out by Mike Tyson in his comeback fight, said he was going to wrap Tyson in his “cocoon of horror.”

Barker’s comments about his skills are just as priceless. Let’s be real about this. Barker stand a chance against Martinez, and his hands aren’t as fast as Martinez, and he’s not particularly elusive, unless you consider elusive as someone standing right in front of his opponents in a straight up position. Martinez is going to have no problems whatsoever finding Barker’s wide open head with his shots tonight. Elusive? That’s too funny. I do give Barker, 6’0 1/2″ an advantage in height compared to the 5’10” Martinez, but we’re only talking a couple of inches here. That’s no advantage when you don’t have the power, the handspeed or the talent to win the fight. Barker might as well be 5’3″, for all the good it will help him in this fight.

Barker is going to have no advantage at all in this fight as far as I can tell, none. He really is someone that should have been weeded out a long time ago before he got to this point, but the problem is Barker has been matched so carefully that he’s only ever faced one fringe contender, Domenico Spada, and thus he’s been able to move up to this fight without getting picked off by more talented contenders in the division such as Peter Quillin and Daniel Jacobs.

Juan Manuel Lopez vs. Mike Oliver tonight in a tune-up for Juanma for Salido rematch »