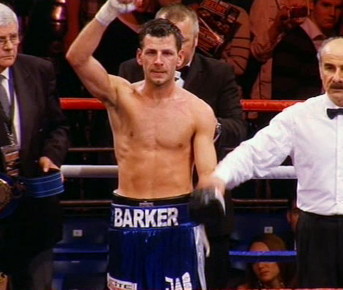 By Scott Gilfoid: It’s going to be a long sad plane flight back home for London for Darren Barker (23-0, 14 KO’s) tonight after he gets whipped by WBC Diamond middleweight champion Sergio Martinez (47-2-2, 26 KO’s) on HBO in front of what will hopefully be a large viewing audience.

The Barker-Martinez fight will also be shown in the UK, which probably isn’t a good thing because Barker is going to take a major thumping in this fight. It might be better if the screen goes black when things start getting out of hand. Unfortunately that means the screen would have to black out on the fight in the 1st round, because I can’t see where Barker can even compete for a moment in this fight.

The talent just isn’t there for the tall, skinny, stand up fighter. He’s got a fighting fighting style that reminds me of watching old grainy fight video from the past. Barker looks out of place in this day and age, and I still can’t understand how or why the World Boxing Council has given him a number #3 ranking based on wins over mostly domestic level opposition. The WBC will be able to make needed adjustments to their rankings after Barker gets slapped down tonight by Martinez.

The fight is going to be a pretty routine affair where Barker comes plodding forward with his straight up European fighting stance, shooting out slow spaghetti-like jabs, and throwing painfully slow right hands and left hooks. Martinez will move around a little like a hungry tiger eying a wounded wildebeest and as soon as Martinez pounces on Barker, we’ll see the British fighter rolling around on the canvas trying to pick himself up. I expect this process to be repeated two or three times before the fight is ultimately halted in the 1st or 2nd round. If I was to make a pick, I’d say it’s going to be over in the 1st round. Barker is just too primitive to last long against a hungry tiger like Martinez and this is going to be too easy for the talented Argentinian.

I just hope Martinez starts stepping up his competition again after this fight because he really made a mistake by fighting Barker. No one cares about this fight and tickets are reportedly moving slowly. It’s probably going to have a ton of unsold seats tonight at the Boardwalk Hall in Atlantic City, New Jersey. I wish Martinez’s promoter Lou Dibella has asked me before choosing Barker for his fighter to defend his title against because I’d have warned him about boxing fans not being interested in seeing this mismatch.

« Arreola vs. Butler on November 5th: Another easy fight for Chris

Barker: My hands are as quick as his [Martinez], I will show him what a quick middleweight I am »