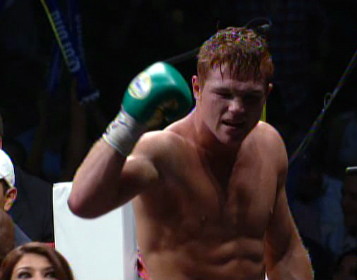 “Canelo”, as his fans call the popular redhead is busy preparing for his battle with Gomez at Big Bear, California. Avarez will be making the 2nd defense of his title against Gomez who first drew media attention on the popular TV show “The Contender”.

The venue for the Alvarez – Gomez fight will be the Staples Center in Los Angeles, while the Mayweather – Ortiz fight will be 300 miles away at the MGM Grand in Las Vegas. Promoters for the unusual split site twin bill are convinced that “Canelo’s” popularity in Mexico will carry the day. Golden Boy Promotions CEO Richard Schaefer was quoted in “The Press Enterprise” saying:

“He has a rock star following in Mexico. He is clearly considered Mexico’s new icon. Here in America they call him the Mexican James Dean.”

Alvarez’ popularity within the large Hispanic community in Southern California enabled him to sell out the Honda Center when he defeated Matthew Hatton in March. He also sold out the venue in Guadalajara for his 1st title defense against Ryan Rhodes.

One of the reasons Canelo is training at Big Bear is to avoid the distractions by the paparazzi in his homeland. Saul has been seen with models, actresses and Miss Universe on occasion. The surroundings at Big Bear enable him to focus on boxing.

The 30 year old Gomez is also very popular in Mexico. His most notable victories were over Arturo Gatti and Jose Luis Castillo. A loss to Miguel Cotto was his only loss in seven years. Gomez is looking forward with confidence to his fight with Alvarez. He feels that a victory over someone of “Canelo’s” stature will propel him towards a mega fight with one of the premiere fighters in boxing.

Saul has received some criticism for not fighting more dangerous opponents, but taking into consideration that he is only 21 years old and already has the WBC title one might ask what is the rush?

Saul Alvarez seemingly is on his way to super stardom. He has movie star good looks and poise in front of cameras that belie his youth. “Canelo’s” promoters and the brain trust that surround him recognize a cash cow when they see one.

« Burns now likely to vacate WBO title rather than fight Broner: Looks like a duck job