Burns now likely to vacate WBO title rather than fight Broner: Looks like a duck job 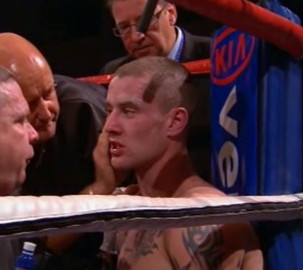 But now Burns’ trainer Alex Morrison is saying he’s having problems making the super featherweight limit, and that Burns will likely vacate his World Boxing Organization title and move up in weight to the lightweight division to go after one of the titles up there rather than face the dangerous Broner. Looks like a good duck job to me. How sad. Burns is going to run away rather than get crushed by Broner on November 26th.

I think it’s stupid to be honest, because Burns won’t do any better at lightweight. Can you imagine what WBA champion Brandon Rios would do to a weak puncher like Burns? How about Juan Manuel Marquez? Put Burns in with him and you’ll be laughing all night long. What a mismatch. Burns should just stay and super featherweight, face his fears and take his beating against Broner like a man.

Here is what Burns’ trainer Morrison said in an interview at the BBC: “My worry is Ricky making the weight. It gets more and more difficult for fighters to keep making the nine stone, 4 lbs mark [126 lbs] as they get older. Ricky is now 28 and it was always the plan for him to move up to lightweight. I’ve spoken to [Frank] Warren and he agrees with me. Money isn’t everything. Nothing is signed or sealed but I advising him against the fight [against Broner]. Ricky is on the verge of taking my advice and saying no. I would like him to relinquish the belt and move up to win a second world title.”

I smell fear. The timing of this is bad, just when Burns is about to fight his first credible opponent while champion. The WBO lightweight title is vacant right now and that’s obviously the belt that Burns’ handlers are eying right now. The number #1 contender is Antonio DeMarco, and there could be a small chance that Burns could pick up that paper title against the badly flawed DeMarco. But Burns would fold as soon as he faces someone like Yuriorkis Gamboa or Jorge Linare. I guess he could always do another vacate job before then though rather than take a knockout loss. This could become a real habit for Burns.

« Prescott: Khan is hoping McCloskey will beat me because he knows I’ll destroy him