Helenius: I’ll be ready to fight the Klitschkos in one, two or three fights 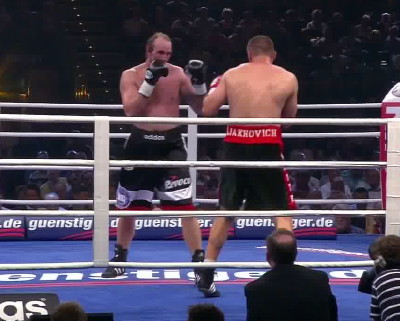 By Dan Ambrose: Unbeaten heavyweight contender Robert Helenius (16-0, 11 KO’s) figures he’ll be ready to step up a level and face the Klitschko brothers in two or three fights. He thinks he needs to build up his confidence a little more before facing one of the Klitschkos. Helenius, 27, recently defeated former WBO heavyweight champion Sergiy Liahovich by a 9th round TKO on August 27th.

It was a good for the 6’6 1/2″ Helenius, but also a very sloppy one as well. He was hit often in the fight and didn’t use his size to dominate the way that the Klitschko brothers do. Part of the reason for that is he doesn’t possess a good jab to keep his opponents on the outside. He also doesn’t have a good left hook like the Klitschkos do. But perhaps even more important, Helenius defense is just awful to the point where he’ll probably never be good enough to beat either of the Klitschkos no matter how old they are.

In an interview at eastsideboxing.com’s On the Ropes Boxing Radio show, Helenius said “Yeah, I’m not sure I’m ready for that [fighting the Klitschkos]. Maybe one or two or three fights maybe, just to make my confidence a little bit higher and to work on my stamina a little more.”

Helenius is too much of a slow plodder to beat the Klitschkos. I want to see that fight but he’s going to get knocked out when that time comes because he’s too slow.

Vitali may be 40, but he’ll still easily beat Helenius now, next year and the year after. It goes beyond age to the basic talent, and Helenius comes up short in that department and always will when it comes to the Klitschkos.

Helenius plans on returning to the ring in November, but he’s not sure who he’ll be facing at that time.

« Will Adamek have a new strategy against Klitschko?