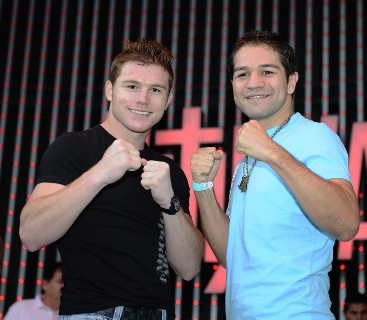 The fight was be shown on HBO as an undercard fight for the Floyd Mayweather Jr. vs. Victor Ortiz championship fight. There’s a lot of pressure on the young 21-year-old Alvarez to perform well in this fight, because Alvarez, who is more of a welterweight than a light middleweight, doesn’t have the power or the boxing skills that Alvarez possesses. However, Gomez thinks he’s going to win just the same and points to his experience against better fighters as something that will help him win this fight tomorrow night.

“My losses are part of my experience,” Gomez said to RingTV. “Alvarez has more fights than I do, but I’m more experienced in terms of facing better and bigger fighters. I’ve been in deep water. He can’t show me anything I haven’t seen. I can show him things he hasn’t. Alvarez seems mature in how he speaks and behaves outside of the ring but ring maturity comes from facing adversity in a fight. I’ve faced it.”

There’s little question that Gomez has fought the better opposition of the two, but not by a large margin. The quality guys that Gomez has fought are all fighters pretty much that Alvarez would likely beat. The only fighter on Gomez’s resume that Alvarez would be questionable over is Miguel Cotto, but I wouldn’t bet against Alvarez against him because he’s a better boxer than Cotto and I could see him out-boxing him to get a decision. The other quality fighters that Gomez has fought – Jesus Soto Karass, Jose Luis Castillo, Ben Tackie, Arturo Gatti and Jesse Feliciano – are guys that Alvarez would run over like speed bumps. He’s much too good for those guys, even though Castillo was a much better fighter in his prime than Alvarez is at this early stage in his career. Castillo was way over his old weight class of lightweight and old at 37 by the time Gomez fought him.

Alvarez should win this fight easily. Gomez was destroyed against Cotto in 2008 in a 5th round TKO, and Alvarez brings all the things to the ring that Cotto did, but more because he’s bigger than Cotto. Gomez will have problems taking the big shots from Alvarez in this fight. I can’t see him lasting long with Alvarez unloading on him.

« Steward: Ortiz could give Mayweather a lot of problems with his energy, fast pace and youth

Dawson-Hopkins: Chad to prove that it doesn’t matter who trains him, he’ll still win »