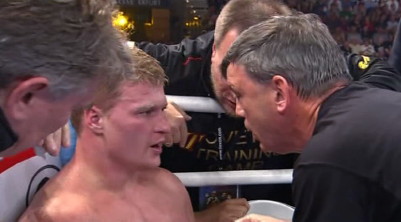 By John F. McKenna (McJack): With Alexander Povetkin (22-0, 15 KO’s) and Robert Helenius (16-0, 11 KO’s) both winning their respective fights Saturday night it would be a logical conclusion to assume that the two should be matched against each other.

Povetkin won a unanimous decision over Ruslan Chagaev (27-2-1, 17 KO’s) while Helenius scored a ninth round TKO over Sergei Liakhovich (25-4, 16 KO’s). Povetkin is ranked by the Ring at #3 and Helenius is ranked #9. Both fighters are undefeated both are European and both are backed by the German promoter Sauerland. The fight would be a natural sell in Europe, particularly after their victories on Saturday night. A match against each other would also provide Povetkin and Helenius with much needed experience before they tackle a fight with either of the Klitscko’s.

Povetkin had the opportunity to fight Wladimir Klitschko in 2009 but trainer Teddy Atlas opted to back out of that fight because he felt Alexander was not ready yet for a fight with Wladimir. Atlas initially started looking to Eastern Europe for potential heavyweight contenders because he liked the work ethic displayed by fighters from that part of the world. He liked what he saw in Povetkin and became his trainer. Atlas was well pleased with the 232 ½ pound 2004 Olympic Gold Medalist’s performance against the tough Chagaev. With his victory over Chagaev, Povetkin won the “regular” World Boxing Association (WBA) heavyweight championship. Wladimir Klitschko was elevated to “Super” heavyweight champion by the WBA after his victory over David Haye in July, leaving his title vacant. The action by the WBA allowed Povetkin and Chagaev to fight for the vacant title.

Helenius had more trouble than was expected from the largely inactive Liakhovich and after seven rounds the fight was very close. Helenius’ edge in stamina began to pay off in the eighth round and he floored Liakhovich near the end of the round. The end came in the ninth round when Helenius landed his trademark right uppercut as part of a combination that ended the fight.

It remains to be seen whether Teddy Atlas will ever allow Povetkin to fight Wladimir Klitschko, who he has been highly critical of in the past. As it stands now Atlas has the “regular” WBA heavyweight champion in his stable of fighters.

« Ortiz believes the time is right to defeat Mayweather

Froch could take local fight in UK after Ward fight »